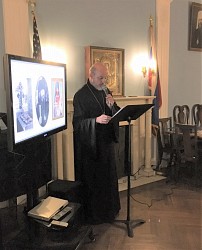 On Sunday, October 31, with the blessing of Metropolitan Hilarion of Eastern America & New York, First Hierarch of the Russian Church Abroad, Bishop Nicholas of Manhattan invited everyone interested in the history of the fatherland to listen and take part in the discussion of the lecture by Archpriest Serafim Gan entitled, "The Glorification of Saints in the Russian Church Abroad," which he prepared on the occasion of the 40th anniversary of the glorification of the Holy New Martyrs and Confessors of Russia and the 25th anniversary of the glorification of Holy Wonderworker Jonah (Pokrovsky), Bishop of Hankou. The event took place at the Synodal Headquarters in New York City.

The main part of the lecture was dedicated to the 40th anniversary of the glorification of the New Martyrs of Russia. Fr. Serafim spoke, in part, about the circumstances of the glorification by the Russian Church Abroad of Righteous John of Kronstadt, the Royal Family and Tsar Emperor Nicholas II, the Nun-Martyr Elizabeth Feodorovna and her companion, the Nun Barbara.

It is noteworthy that after the discovery and examination of the holy relics of the Nun Martyr Elizabeth and the nun Barbara, which exuded myrrh, Patriarch Diodoros of Jerusalem arrived in Gethsemane where he said that these were not only Russian’s, but great saints of the entire Orthodox Church, and expressed the hope that veneration of the martyrs would unite all Orthodox and will strengthen them in unity. His words turned out to be prophetic.

All the glorifications of ROCOR were confirmed by the entire Russian Church, which suggests that these actions abroad, undertaken not only to comfort believers in a foreign land, but also to strengthen our brothers in their historical homeland, were pastorally justified. Thus, the glorification of St. John of Kronstadt put an end to Khrushchev's persecutions in the Soviet Union, and the glorification of the New Martyrs in the Diaspora broadly preceded Perestroika and the beginning of the revival of the Orthodox Faith in the fatherland.

At the end of the lecture and discussion, a small concert of the Tsar-Martyr Nicholas II Male Choir under the direction of Adrian Fekula took place, during which the choir sang several hymns from the service to St. Jonah of Hankou. Fr. Serafim began to write the service to the saint in 1996, prior to his ordination to the priesthood, and completed it in 2016. It was approved the same year.

Later, Bishop Nicholas invited everyone present to a reception. 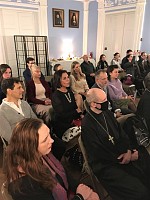