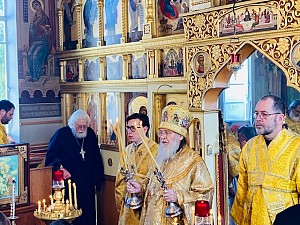 On Demetrius Soul Saturday, November 6, the 50th anniversary of the repose of one of the preeminent diasporan clerics of the 20th century, Archpriest Seraphim Slobodskoy, was commemorated in Holy Virgin Protection Church in Nyack, NY. Celebrating Divine Liturgy in the church whose construction Fr. Seraphim himself oversaw was the First Hierarch of the Russian Church Abroad, Metropolitan Hilarion of Eastern America & New York.

His Eminence was co-served by Eastern American Diocesan vicar Bishop Nicholas of Manhattan, as well as:

Praying in the church was Archpriest Andre Papkov (cleric of the Diocese of Chicago & Mid-America).

Divine Liturgy was held under the aegis of the wonderworking Kursk Root Icon of the Mother of God. Singing at the service was an expanded parish choir under the direction of Subdeacon Victor Gonchar.

Upon conclusion of Liturgy, a panihida was held for the ever-memorable Archpriest Seraphim and his Matushka Elena, as well as Archimandrite Job (Kotenko; cleric of Holy Trinity Monastery in Jordanville, NY), who reposed that very morning.

A reception was then held in the parish hall, during which greetings from His Holiness Kyrill, Patriarch of Moscow & All Russia, and His Beatitude Onufry Metropolitan of Kiev & All Ukraine, were read aloud. Various clerics and parishioners who labored or studied under Fr. Seraphim’s tutelage shared their recollections. A video montage detailing his life and work was shown for all, after which members of the Association of Russian Explorers Outside of Russia (NORR) performed various camp hymns in honor of Fr. Seraphim – the original spiritual counselor of the camp. 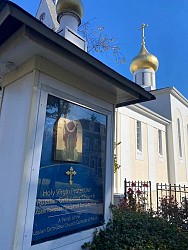