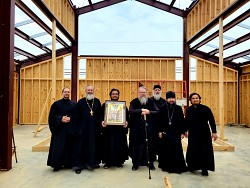 On Saturday the 20th and Sunday the 21st of November, the Synaxis of Holy Archangel Michael and the other Heavenly Bodiless Hosts, His Eminence, Metropolitan Jonah (Paffhausen), paid an archpastoral visit to Holy Myrrhbearers Church in Harrisonburg, VA.

Arriving Saturday afternoon, the hierarchal guest began to instruct the faithful on the rubrics for a hierarchal service. The choir, readers, altar servers, and clergy asked questions as His Eminence discussed the details of each different aspect of the service. Metropolitan Jonah then led the Great Vesper service, followed by an hour and a half question-and-answer talk with parish catechumens and the newly illumined.

On Sunday, morning, the Metropolitan was greeted by rector Priest Gabriel Weller and parish clerics: Priest Richard Reed and Deacons Nektarios Kanney and Thomas Opyoke, joined by Hieromonk Felipe (Balingit) and Deacon Romanos Regado (clerics of the Mission in the Philippines).

The service was lifted up by the melodious voices of the parish choir. Fr. Felipe delivered a sermon to the faithful on how true joy imitates Christ and heals our self-entitlement.

After Liturgy, a festal luncheon was served at the church, followed by a visit to the new church building site. 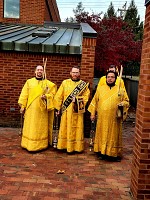