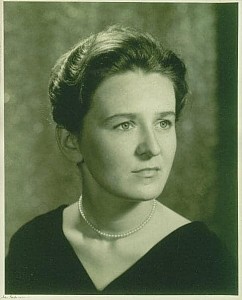 Early in the morning on Sunday, November 28, Anna M. Shohov (née Znosko), peacefully reposed in the Lord in the presence of her spiritual father and her daughter and son. Anna Shohov was born on July 8, 1938, in Brest-Litovsk, then Poland, in a Russian Orthodox family. Her father, the Archpriest Mitrophan Znosko-Borovsky, was rector of St. Nicholas Brotherhood Church; her mother, Alexandra Semenovna Tsybruk, was the daughter of an archpriest in the city of Belsk and Anna Pavlovna, his matushka and a church choir singer.

As a result of World War II, the Znosko family found themselves in a displaced persons camp in Mönchehof, Germany, until 1948, when her father was sent by the Russian Church Abroad to minister to the needs of the White (anti-communist) Russian émigrés in Northern Africa. Anna lived with her family in Casablanca, Morocco, where she received schooling at École Jeanne d’Arc, École Carmel Saint Joseph, and Lycée de Jeunes Filles (French Baccalaureate School), as well as religious, language, and music instruction in the Russian Orthodox émigré community and parish school. Already at that time, Anna distinguished herself as a talented singer and reader. During the summers, in 1955-57, Anna was a counselor at the Vitiaz camp in Laffrey, near Grenoble, in the French Alps.

In 1957, when Anna suffered a severe case of poliomyelitis (before the introduction of the polio vaccine), was hospitalized, and thought to be near death. Her father, then on assignment in Cannes, France, appealed to Archbishop John (Maximovitch) for prayerful intervention, and Anna recovered. Her physicians were amazed at her recovery and miraculous healing.

Anna came to the United States with her family in 1959: her father was assigned as rector of St. Seraphim Church in Sea Cliff, NY. From 1959 to 1970, Anna sang under the direction of Boris Mikhailovich Ledkovsky — a well-known émigré composer of Orthodox sacred music — in the Synodal Choir at the Cathedral of Our Lady of the Sign in New York City, where she became renowned for her musicianship and exceptional singing voice. She studied at Molloy College and taught French at the Convent of the Sacred Heart in Greenwich, CT.

Anna Znosko married Dr. Panteleymon L Shohov in 1969. Dr. Shohov graduated from Boston University Medical School in 1956 and then served as a captain in the U.S. Air Force. Upon completion of military service, he returned to Sea Cliff and worked as a pathologist at Mercy Hospital in Garden City, NY.

After her marriage, Mrs. Shohov was a volunteer church singer and reader at St. Seraphim Church, where she frequently led the choir. She was an expert on the rubrics and her articulate and beautiful reading voice made her invaluable. She often conducted entire church services on her own, as both reader and singer. Her singing was particularly appreciated by the faithful during the Passion Week services, when she would sing solos, as well as trios with her mother and sister. Her children were raised singing in the choir, and she also taught many others to sing and read in church.

On Tuesday, November 30, Bishop Nicholas of Manhattan officiated the funeral service in St. Seraphim Memorial Church in Sea Cliff.  The following day, Anna Mitrophanovna was laid to rest in the cemetery at Holy Trinity Monastery in Jordanville, NY, next to her husband and daughter, Matushka Elizabeth Shohov-Olhovsky.