On Friday, December 3, the eve of the great feast of the Entry into the Temple of the Most Holy Theotokos, the myrrh-streaming Icon of the Mother of God "Softener of Evil Hearts" arrived in the Eastern American Diocese.

Greeting the icon on Friday afternoon was Archimandrite Siluan (Lembei; cleric of Three Hierarchs Church in Hollywood, FL). Fr. Siluan then accompanied the myrrh-streaming image to St. Vladimir Church in nearby Miami, where it was greeted by local clergy before the start of the festal All-Night Vigil.

The church was filled to capacity with worshippers; a screen that had been placed by the entrance outside for some of the faithful to view the services malfunctioned, resulting in all of the worshippers entering into the church. Interestingly, the last time the screen had malfunctioned was exactly one year ago, also on the feast.

All of the faithful were anointed with myrrh from the holy icon. After the service, the miraculous image departed for Three Hierarchs Church in Hollywood, where it would visit for the festal Divine Liturgy on Saturday morning. Meanwhile, the parishioners at St. Vladimir’s prepared for Liturgy the following morning, as well as Liturgies on Sunday, on Monday for the Holy Right-Believing Great Prince Alexander Nevsky, and Tuesday for the Holy Great-Martyrs Catherine and Mercurius. 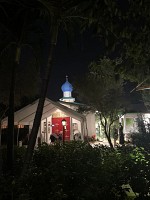 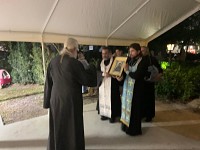 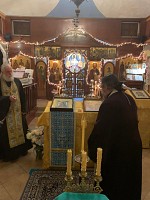