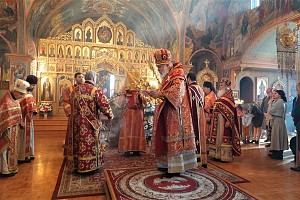 Both services were sung by the Holy Trinity Seminary choir under the direction of Deacon Nicholas Kotar.

The divine services were held under the aegis of the myrrh-streaming icon of the Mother of God "Softener of Evil Hearts," currently visiting from Moscow and traveling the Eastern American Diocese.

A multitude of parishioners prayed at Liturgy, most of whom communed of Christ’s Holy Mysteries.

Upon completion of Liturgy, His Eminence greeted those gathered with the Lord’s Day, and addressed the faithful with a sermon:

"Today in the Gospel we heard how the Lord once again worked a miracle: He had mercy on the woman who had been bowed for 18 years. He laid His hand on her and she was miraculously healed. And we hear the rebuke of the ruler of the synagogue, who chastised the Lord for doing this deed on the sabbath. The Lord answered him, ‘Hypocrite! Is it not more important to do a good deed on the sabbath, than to fulfill the law?’. This is a lesson for us, that we not forget that, despite whatever rules or canons we may have and which we must observe, we must of course be led in all things by our discernment, as the Holy Fathers counsel. This is higher than the law. The Lord gives us an example of love for our neighbor and discernment, showing us good works and love are above the law."

His Eminence noted that it was especially important to do good works now, as we traverse the area of the Nativity Fast.

Fr. Serge sincerely thanked Sergei Fomin, the guardian of the myrrh-streaming icon of the Mother of God "Softener of Evil Hearts," who has been traveling the world with the icon since 1998. The rector presented him with an icon of the cathedral’s Heavenly patron, the Holy Right-Believing Great Prince Alexander Nevsky, the original of which was painted by cathedral cleric Protodeacon Paul Drozdowski in honor of the 800th anniversary of the princely saint’s birth.

In order to offer financial assistance to Holy Trinity Seminary, the cathedral held its annual plate collection. Fr. Serge presented seminary dean Dr. Nicolas Schidlovsky a check for $22,000. He also thanked the seminary choir for adorning the divine services with their singing.

A luncheon was organized in the parish hall, during which the seminarians were given gift packages and copies of the myrrh-streaming icon. 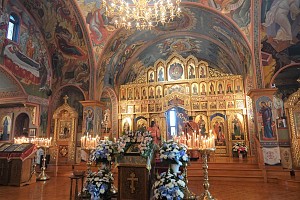