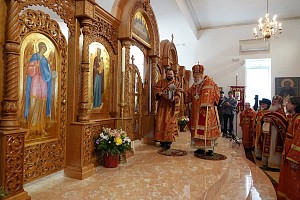 On Sunday, February 6, when the Holy Church honors the memory of the Synaxis of the Holy New Martyrs & Confessors of Russia, Archbishop Gabriel of Montreal & Canada celebrated Divine Liturgy in honor of the patronal feast day of the eponymous church in Brooklyn, NY.

Singing at the divine services was a male trio under the direction of Nikodim Buryakov.

Prior to the start of Liturgy, Archbishop Gabriel performed the blessing of the new iconostasis, which had been installed in the church as part of the building’s long-term renovations.

During the Hours, His Eminence awarded altar server Phillip Zayets the right to wear the orarion for his diligent service.

The church was filled with worshippers. The divine services were held under the aegis of the myrrh-streaming Montreal-Hawaiian Icon of the Mother of God. The icon streamed myrrh abundantly both on the way to church and during the service. Parishioners gathered the holy myrrh emanating from the icon and anointed themselves with it.

Upon completion of Liturgy, Archbishop Gabriel congratulated the clergy and faithful with their patronal feast, and then addressed those gathered with a sermon on the day, in which he said, in part:

"The Russian people, though calling themselves Orthodox, at the beginning of the 20th century had begun to abandon God and the principles of piety that had been so characteristic for Holy Rus’. The Righteous John of Kronstadt saw this and warned the people that if they did not return to their roots: to the Orthodox Faith, to piety, and not only outwardly, then Russia would be visited by terrible misfortunes. So it was: the Russian people ignored the call of the All-Russian elder, and the Lord permitted the most terrible yoke in human history to come upon them.

"When the revolution began, from 1917 to 1920, the godless wiped out roughly 10,000 people – clergy and laity. The Royal Family was brutally murdered. The Holy Hierarch Vladimir of Kiev became one of the first victims, and in the 1930s, the number of victims of the new regime soared over 100,000.

"One wonders: how could such a thing happen in Orthodox Russia? How did the godless authority seize power in a moment? How did demonic powers begin to persecute the Church, murdering and torturing her clergy and laity? God permitted all of this to happen, because the people had begun more and more to turn away from Him. The communist authority actively persecuted the Church, desiring to annihilate it, with one of the country’s leaders even promising in the 1950s to show the people "the last priest." But God is not mocked. And we see how despite all of the efforts to destroy the Faith and the Church in Russia, Russia was freed from the communist yoke, and the Church glorified hundreds of thousands of martyrs. The Church Abroad was first to glorify the New Martyrs & Confessors in 1981, when doing so in Russia was yet impossible. The Moscow Patriarchate repeated the act of glorification in 2000."

His Eminence called on the faithful to know and commemorate those who had been glorified for the Holy Faith, to study their lives and the tragic history of that period, and to pray that the Russian people return to Orthodoxy and piety.

The parish rector congratulated Archbishop Gabriel on the occasion of his namesday, and on behalf of the parish presented him with a panagia. For their good labors, he also presented copies of the icon of the Synaxis of the New Martyrs to Fr. Petro Kunitsky, parish warden Ihor Zayets, and Anthony Zananiri, who was accompanying the myrrh-streaming icon.

Fr. Serge also introduced parishioners to the parish’s new cleric – Archpriest Vasily Zelenyuk – who will be fulfilling the duties of deputy rector.

Parishioners were then anointed with holy myrrh from the Hawaiian Icon.

A festal luncheon was offered in the church hall, during which interaction by the clergy and faithful continued, and which was accompanied by a concert by Pavel Suliandziga and Valeriya Chibisova. 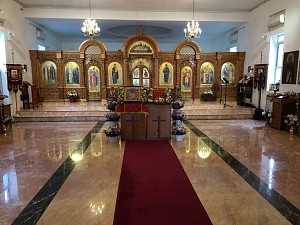