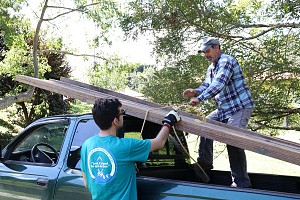 On the Sunday of Orthodoxy, March 13, the Misión Ortodoxa San Juan Clímaco in San Germán, PR, welcomed eight students from across the United States as part of the Orthodox Christian Fellowship’s (OCF) Real Break ministry. The Mission was chosen as one of this year’s service and pilgrimage locations.

The group was mentored by Archpriest Andrew Morbey, dean of St. Mary Cathedral, a historic OCA church in Minneapolis, MN, which was consecrated in 1906 by St. Tikhon of Moscow. The youth advisor was Jessica Hendricks, a longtime friend and supporter of the Dormition of the Mother of God Monastery in Rives Junction, MI.

Fr. Andrew delivered a heartfelt homily (graciously begun in capable Spanish and later simultaneously translated by mission rector Fr. Gregorio), which highlighted the incarnational significance of icons as a real witness to God’s love for mankind. The luncheon, prepared by Matushka Euphemia and several parishioners, was an ideal backdrop for the students and the parish to become acquainted. The day was rounded out by an evening tour of Old San Germán, the island’s second-oldest town, with visits to the Museo de Arte y Casa de Estudio, the Museo de la Historia de San Germán, and finally the historic Porta Coeli, a convent and church originally erected in 1609.

Monday was a work day at the Mission. The parents of two parishioners, Samuel and Natanael (Giorgios) Vélez, gave a presentation about sustainable agriculture and then guided half the students through planting seedlings for the parish vegetable garden. The remaining students helped with hauling lumber for future building projects on the property. Later, everyone joined hands in organizing roofing material, during the course of which students unexpectedly encountered certain local fauna: a python and a boa, a centipede, and a brown tarantula! The eventful day was brought to a close with everyone at Petate’s Café in Sabana Grande, where the Real Breakers got to know the parish youth a little better while Fr. Andrew, Fr. Gregorio, and Matushka shared old stories.

The final days of this Real Break trip would be bringing the students to the San Juan area, where they would volunteer for Techos Pa’ Mi Gente ("Roofs for my People"), an organization which rebuilds roofs and homes in communities affected by natural disasters. To give them a breather before their remaining few days of hard work, the mission introduced the group to two spectacular beaches on the island’s west coast: Crash Boat, known for its turquoise waters, snorkeling, and diving piers, and Punta Borinquen, a remote and quiet spot with dramatic waves. Later that evening, winding down from an adventure-filled day, the students and the parishioners all gathered in the mission’s chapel and chanted a beautiful Akathist to the Theotokos in Spanish and in English. The final meal together, catered by a local friend, followed the Akathist.

It was hard for the volunteers to say goodbye to their new friends in Christ. Fr. Andrew, Fr. Gregorio, and Jessica exchanged the kindest of words, invited OCF and the mission parish to remain in contact, anticipated return visits, and encouraged these wonderful students in their upcoming ventures. 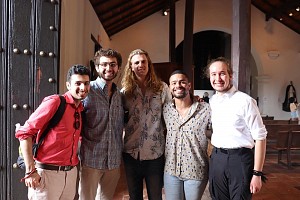