Archpriest Victor Potapov: "We made a solemn promise to pray before the Saints of the Kiev Caves until the end of the conflict in Ukraine" 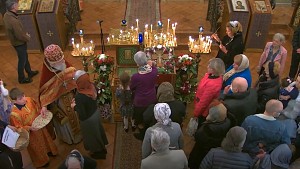 The clergy and faithful of St. John the Baptist Cathedral in Washington, DC decided to place the relics of the saints of the Kiev Caves – a remarkable gift from Metropolitan Vladimir, former Primate of the Ukrainian Orthodox Church – in the middle of the church and conduct special prayer services before them each Sunday – to ask the peace in Ukraine. Archpriest Victor Potapov, rector of the parish, said that services have been made also before the icons of the Mother of God and St. John of Shanghai & San Francisco.

– Father Victor, our parish undertook several unusual moves since the start of the conflict in Ukraine in order to contribute to reaching peace in Ukraine. What has happened, and why did you decide to do so?

– In the beginning of the military conflict in Ukraine, we were obviously, like most people, shocked because we of course consider Ukrainians as brothers and sisters. We decided that what we as Christians need to do is to pray, so we served a special service for peace in front of our copy of the Kursk Root Icon of the Mother of God, and the next time we served before the icon of St. John of Shanghai & San Francisco, who founded our parish in 1949. He was born in the Donbass region, in the village of Adamovka. People in Eastern Ukraine know him very well, so we prayed to him that he bring peace to his home.

And then, the idea came to us to pray before the relics of the saints of the Kiev Caves. About two or three weeks into the war, we decided that we would put them in the middle of the church, so they are visible to everyone, and they send a strong message about peace. Of course, we explained to the people why we are doing this. Usually, we do not put relics in the center of the church, but our faithful understood that it is because of the war.

We have made a solemn promise that we will serve a special prayer service every Sunday after both Liturgies, English and Church Slavonic, to pray that the great saints of the Kiev Caves Lavra intercede on behalf of Ukraine and Russia before God.

So, people appreciated this idea. We served the first such services a couple of weeks ago, and we intend to do this in the future until the war ends.

– How did you receive the relics of these great saints of the Kiev Caves in Washington?

– In 2009, my Matushka Maria Potapova, our deacon, and I undertook a pilgrimage to Kiev, and before we left, I asked the late Metropolitan Vladimir, who was the head of the Ukrainian Orthodox Church at the time, to give us the relics of the saints of the Kiev Caves. His Beatitude responded through his secretary that they would be happy to do that, just as long as these relics are made available to all Orthodox Christians in the Greater Washington area.

We received these relics, we put them in a beautiful reliquary, and they have now been in our church with us for more than 10 years.

– Our parish started a fundraising campaign to support refugees and other people affected by the conflict just a few days after it started. Are we successful in this effort?

– Our fundraising campaign is approaching $25,000. This money has been collected to refugees from Ukraine who found shelter in different parts of the world, as well as to people who remain in Ukraine. They will be sent to the Fund for Assistance to the Russian Orthodox Church Outside Russia. The Fund has already collected close to $250,000. This money will be sent to our Metropolitan Mark of Berlin & Germany, who will provide them to Metropolitan Onufry, the primate of the Ukrainian Orthodox Church, for further distribution at his discretion. We were able to send $68,000 already, and the rest will go in smaller portions.