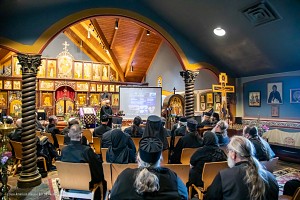 On Tuesday, April 12, priests and deacons carrying out their pastoral ministry in the southern half of the Eastern American Diocese arrived in Roswell (Atlanta), GA for the start of the Lenten Clergy Retreat held in St. Mary of Egypt Church.

Early in the morning, the clerics gathered in the church for a moleben before the start of any good work. Eastern American Diocesan vicar Bishop Nicholas of Manhattan greeted the clergy and relayed the blessing of Metropolitan Hilarion of Eastern America & New York. Metropolitan Jonah (Paffhausen) and parish rector Archimandrite John (Townsend) likewise greeted the more than 35 priests and deacons.

After a sumptuous lunch provided by the parish, interaction continued throughout the day. Deacon Michael Pavuk (director of development of Holy Trinity Seminary) delivered remarks to the clergy about the fruitful works being done at the premier educational institution of the Russian Church Abroad. Protodeacon Peter Markevich likewise presented on a number of new releases from Holy Trinity Publications.

Later in the afternoon, the Communion Rule, an Akathist to Venerable Mary of Egypt, and Matins were served in the church, during which all retreat attendees were able to confess their sins in preparation for Holy Communion the following day.

The parish served a hearty lenten meal, after which Grand Compline was served and all returned to their rooms in quiet contemplation of the day’s successes.