Jerusalem: Pilgrimage of Bishop Nicholas to the Holy Land Continues 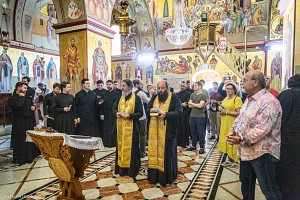 From Sunday the 19th through Tuesday the 21st of June, while accompanying the PaTRAM Male Choir, Bishop Nicholas of Manhattan continued his pilgrimage to the holy sites of Jerusalem and beyond. Joining him was Western American Diocesan vicar Bishop Theodosius of Seattle.

On Sunday afternoon, the hierarchs and choristers visited the city of Nazareth and the Mount of Precipice. Priest Roman Gultayev, cleric of the Russian Ecclesiastical Mission, provided explanations at each holy site to members of the choir, many of whom were traveling to the Holy Land for the first time. Later in the day, the group proceeded to the Church of the Annunciation, where they sang the troparion, kontakion, and magnification at the site where the Archangel Gabriel delivered the news to the Virgin Mary of the conception of Christ.

On Monday morning, the 50-person group proceeded to the Jordan River, where the hierarchs led the Rite of the Blessing of Water and each person was able to immerse themselves at the hands of Bishops Nicholas & Theodosius.

In the afternoon, the group visited the city of Cana – the site of Christ’s first miracle at the wedding feast. In the evening, a cruise was held on the Sea of Galilee sponsored by PaTRAM founders Alexis & Katya Lukianov.

On Tuesday, the pilgrims began their day to the Mount of Beatitudes, where Bishops Nicholas & Theodosius read the Gospel and the choir sang the Beatitudes. Following this, all traveled to the top of Mount Tabor – the site of Christ’s Transfiguration. There, a moleben was served and the pilgrims were able to have their loved ones commemorated. In the evening, the pilgrims were able to visit the Dead Sea before returning to Jerusalem for the recording of PaTRAM’s newest CD of Rachmaninoff’s All Night Vigil for male choir. 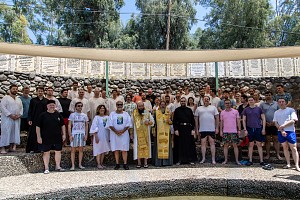 Jerusalem: Pilgrimage of Bishop Nicholas to the Holy Land Continues - 06/22/22