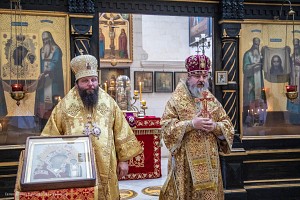 On Thursday, June 23, the feast of Holy Hierarch John (Maximovitch), Metropolitan of Tobolsk, Bishop Theodosius of Seattle celebrated Divine Liturgy in St. Alexander Nevsky Church at the Russian Archæological Excavations in Jerusalem. Concelebrating with His Grace were Bishop Nicholas of Manhattan and Archimandrite Roman (Krassovsky; head of the Russian Ecclesiastical Mission in Jerusalem).

Prayers for the departed were said for the ever-memorable Tsar Alexander III and the newly reposed Metropolitan Hilarion (Kapral). Many pilgrims received Christ’s Holy Mysteries.

At the conclusion of the service, Bishop Theodosius addressed those gathered with a sermon explaining the life of St. John of Tobolosk and how he is a relative of our contemporary ascetic and holy hierarch, St. John (Maximovitch), wonderworker of Shanghai & San Francisco.

A memorial litia was served for Metropolitan Hilarion, whose 40th day of repose falls on Friday, June 24.

In the afternoon, Bishops Theodosius & Nicholas were received at the Russian Ecclesiastical Mission of the Moscow Patriarchate in Jerusalem. Greeting the guests was Archimandrite Alexander (Elisov). The hierarchs were able to acquaint themselves with the grounds and were invited for an informal reception. 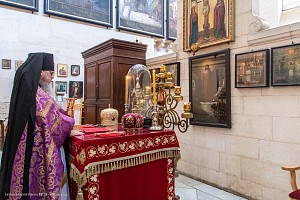