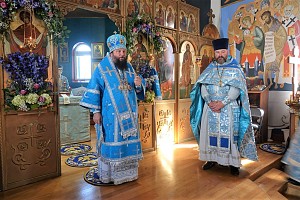 On Friday, October 14, the feast of the Protection of the Most Holy Theotokos, Metropolitan Nicholas of Eastern America & New York celebrated Divine Liturgy in Holy Virgin Protection Church in New Brunswick, NJ on the occasion of its patronal feast day.

Coming to pray at the festal divine services were parishioners and Orthodox faithful from neighboring cities and states. Virtually all of the worshippers at Liturgy communed of Christ’s Holy Mysteries.

This year, Holy Protection Church celebrated the 70th anniversary of its founding. It began, as did many other parishes, with a small group of people under the guidance of an Orthodox priest ‒ Archpriest Fyodor (Theodore) Tonkoshkur. Faithful people, finding themselves in the diaspora, wanted a place for prayer. It was in those years, soon after the end of the Second World War, that a multitude of parishes of the Russian Orthodox Church began to open abroad. The backbone of the newly founded parish was primarily Cossack émigrés. That is why the Protection of the Mother of God – the traditional feast of the Cossack hosts ‒ was chosen as the parish’s patronal feast. These were the first people to donate to the needs of the newly established parish. It officially opened in March 1952.

At first, the divine services were held in a rented space. In the beginning of 1959, the church purchased a plot of land with an old garage, which was remodeled to make a church.

Construction of the new church began in in 1963, and its full consecration took place in 1965, on the feat of the Protection of the Most Holy Theotokos. Icons for the iconostasis were painted by Archimandrite Cyprian (Pyzhov; +2001) and his students.

Since August 2001 unto the present time, the parish has been led by Holy Trinity Seminary graduate Archpriest Leonid Goferman.

In 2010, major renovations began in the church, the last of which was a renovation of the refectory. Now the parish has the opportunity to gather in a bright and lovely space under the church, which hosts meals, lectures on spiritual subjects, and other parish events.

Currently, the parish consists of émigrés from Russia, Ukraine, Belarus, and the Baltics.

Upon completion of Liturgy, Metropolitan Nicholas and the clergy served a short moleben before an icon of the Protection of the Most Holy Theotokos.

His Eminence congratulated the clergy and faithful with the feast and in his sermon noted, in part, that today we, remembering Church history, have also gathered in church to glorify the Mother of God, to pray, and to thank God for the appearance of His Mother.

"There was tumult in Constantinople at that time, just as there is tumult around us today. And all that we have left is to put our hope in the Lord, to repent, and to ask help from above.

"Today in this church, with gratitude to God, we celebrate its patronal feast. Every church is not simply walls, a cupola, or a cross – it is a sanctified space under the protection of our Lord Jesus Christ, the Mother of God, and the parish’s feast or saint.

"This year, we thank the Savior for this church, founded 70 years ago. Memory eternal to the clergy, founders, and parishioners of this church. Our duty is to glorify the Mother of God for what we have received, to adorn this church with our prayers, our efforts, our repentance, so that this parish might continue to flourish, so that many might find the Orthodox Faith here and be strengthened in the Faith. Our duty is to be enlightened ourselves and to enlighten those around us. Thus is the Orthodox family is strengthened."

On behalf of the Council of Bishops, which met in September, on the occasion of the jubilee of the parish’s founding and for his labors on behalf of the Holy Church and Holy Protection Church, Metropolitan Nicholas awarded Fr. Leonid a Synodal gramota.

A festal luncheon was organized for the clergy, parishioners, and guests by the sisterhood, during which many warm words were spoken and brotherly interaction continued. 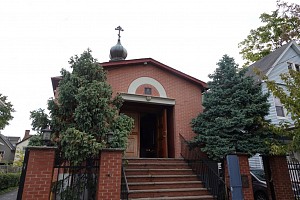