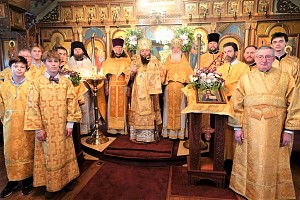 On Saturday the 15th and Sunday the 16th of October, Metropolitan Nicholas of Eastern America & New York paid an archpastoral visit to Holy Trinity Church in Vineland, NJ, on the occasion of the 75th anniversary of the parish’s founding, and celebrated Divine Liturgy.

Holy Trinity parish was founded in 1947 with the blessing of Archbishop Vitaly (Maximenko; +1960), and has its origins in the early 20th century. The area around Vineland began to be settled prior to the start of World War I in 1914. People emigrated mainly from the western fringes o the Russian Empire, driven by poverty and a shortage of land. In America, they purchased land and opened chicken farms.

The nearest Orthodox church at that time was located in Philadelphia. For many, this was quite far. People went to church increasingly less often, while their children assimilated, forgetting their native language and the Orthodox Faith. Archbishop Vitaly recommended to the locals that they get together and organize a church community. As a result, a small circle of Church-oriented people was formed, who took to work organizing the divine services.

With time, the members of the community decided to have their own priest, and began to look for money to purchase land and build a house. On October 5, 1947, the laying of the foundation stone of Holy Trinity Church took place; the building was completed in April 1948. The first Liturgy was celebrated on April 25, 1948, the eve of Palm Sunday. Parishioners organized the first luncheon for the worshippers after Liturgy.

Decades later ‒ during which the church nourished primarily Russian émigrés and their descendants ‒ parishioners came to pray and Liturgy, joined by faithful from nearby parishes and states, most of whom communed of Christ’s Holy Mysteries.

Upon completion of Liturgy, Metropolitan Nicholas greeted the clergy and faithful with the feast, and in his sermon on the Gospel reading of the day specially called the attention of the faithful to the words of Jesus Christ:

"‘And as ye would that men should do to you, do ye also to them likewise’ (Luke 6:31). It would appear that the Savior speaks clearly and simply here. But if we do good and show love toward those who love us, where is the struggle, where is the bearing of one’s cross? If you sacrifice something and expect something in return, how is this an ascetic labor?

"The Lord calls on us to love our enemies, to show them compassion, expecting nothing in return. This is precisely what is lacking today: compassion, co-suffering, aid. People often think: I am joyous and comfortable where I am. But the Lord gives us accessible instructions: how we ought to act, in order to receive true joy. We ought to act as Christ acted, keeping to the golden mean.

"The Lord is love: He manifested compassion, healed the sick, preached to all men repentance and the salvation of their souls. This is an example for us – to manifest kindness, attention, and love. Not to expect anything, but to thank God that He lets us understand, how we ought to live, how we can make God’s words take body in our lives, and what we can do in order to bring another person to the Faith. And then we will feel true joy, feel blessing from above, because God is life."

Metropolitan Nicholas congratulated the parish with its 75th anniversary and wished that the Lord might bless the clergy and parishioners for years to come in prayer and the fulfillment of their special mission: to preserve their inheritance and the culture of their historic homeland in this land, which in accepted them in difficult times.

In honor of the jubilee of the parish’s founding and for his labors on behalf of the Holy Church and Holy Trinity Church, Metropolitan Nicholas awarded Fr. Ljubo a Synodal gramota signed by the hierarchs, who in September too part in the Council of Bishops.

On behalf of the clergy and parishioners of St. Alexander Nevsky, its rector, Fr. Serge Lukianov, presented Fr. Ljubo with a silver liturgical set.

The parish sisterhood organized a festal luncheon for the clergy, parishioners, and guests in the church hall during which members of the parish school put on a presentation. A slideshow of parish history was also shown, to the delight of guests. 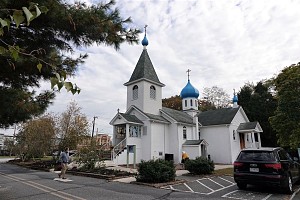