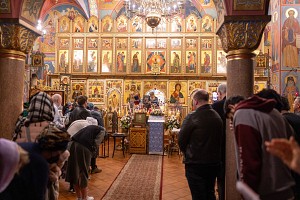 It can be said that an icon is a little window opening a view for us into another world, into the Heavenly Kingdom "come with power" (Mark 9:1). Icons depict the Savior, the Mother of God, and the holy angels just as they also depict holy men, women, and children – that is, people just like us, but who pleased God by their labors in this life. Icons remind us of the need to constantly strive toward God, in Whose image and likeness we were created, but which we have polluted with our sins.

Wonderworking icons are miraculous not unto themselves, as there is only one Source of miracles: God, Who by His inexpressible love for us bestows His mercy and grace. As the Holy Hierarch Theophan the Recluse writes, "Some icons are miraculous because it so pleases God, but the power is not in the icons, or in the people turning to them, but in the bountiful mercy of God toward us who are fallen."

God can work miracles wherever and whenever He pleases. In the thinking of the Holy Fathers of the Church, God’s grace appears as a response to sincere prayer.

It was to such sincere prayer that the parishioners of St. John the Baptist Cathedral in the American capital turned, and in response received the second visitation this year of the Most Holy Theotokos in her myrrh-streaming Hawaiian Iveron Icon. This wondrous image is a paper reproduction of the Montreal Iveron Icon of the Mother of God, whose guardian was José Muñoz Cortés, murdered in 1997.

It is in the context of those three dates that the parishioners of our cathedral are preparing on October 24 to undertake their 24th annual pilgrimage to Holy Trinity Monastery in Jordanville, NY, in the cemetery of which is buried Brother José.

The Hawaiian Icon arrived on the eve of the feast of the Translation of the Iveron Icon to Moscow. It was brought Archpriest Athanasius Kone, rector of our parish in Hawaii, dedicated to the Montreal Icon. That same day, His Eminence Nikoloz (Nicholas), Metropolitan of Akhalkalaki, Kumurdo & Kars, arrived in Washington from the faraway Republic of Georgia. As His Eminence noted in his sermon in our church, he came to the U.S. in order to "bear witness to his veneration of two righteous saints of ROCOR ‒ Hieromonk Seraphim (Rose) and José Muñoz Cortés."

On Wednesday, October 26, at 8:00 AM, Metropolitan Nikoloz celebrated Divine Liturgy in our church, co-served by parish rector Archpriest Victor Potapov and Protodeacon Patrick Mitchell (parish cleric). Fr. Athanasius confessed all who wished to receive Christ’s Holy Mysteries. Arriving later were Priest Gabriel Weller (rector of Holy Myrrhbearers Church in Harrisonburg, VA) and a group of his parishioners. Despite the early hour on this workday, a multitude of the faithful filled the church.

Upon completion of Liturgy, a short moleben was served before the wonderworking image and a reliquary with relics of the saints of the Kiev Caves Lavra, asking for the cessation of miliary conflict and the restoration of peace in the long-suffering Ukraine. After the moleben, Metropolitan Nikoloz delivered a sermon.

His Eminence began his sermon with a brief overview of the history of the Athonite Iveron Icon. "Blood from the wound on the cheek of the Iveron Mother of God," said the Metropolitan, "which appeared as the result of an axe strike made by an iconoclast in the 8th century, has transformed into myrrh, and unites all of us. She blesses thousands and thousands of people who come to her and are anointed with Heavenly myrrh."

Further in his sermon, His Eminence turned the attention of those gathered to the wooden Athonite cross he held in his hand, which had once belonged to the murdered Brother José, and which Fr. Victor had later presented as a gift to the Metropolitan. His Eminence had placed into the cross a piece of the Life-Creating Cross and clad it in a silver encasement. The encasement was made in the shape of the cross that had been worn by the great 20th century saint, the Righteous Jonah (Atamansky) of Odessa, with which he had healed many.

The Metropolitan further stated that today we pray before the wonderworking icon and Athonite cross that belong to the legacy of Brother José. "In the Georgian Church, we honor Brother José as a holy martyr. We also honor as a righteous saint Fr. Seraphim (Rose). Canonization is a formal act. This act has not yet taken place, but despite this we, the faithful of Georgia, honor these two righteous ones as saints, and await a positive decision on the part of your hierarchy. We hope that the time will come when your rector Fr. Victor and all of you will come to my diocese, and together we will pray before the icons of these two righteous saints of ROCOR."

Concluding, Metropolitan Nikoloz said that the past three years have been difficult for the whole world. The pandemic and the military conflict in Ukraine have called forth many questions for which answers are not easily forthcoming. Prayer before the Hawaiian Icon helps us to acquire tranquility and confidence in the future.

That evening, a moleben and akathist to the Most Holy Theotokos was served before her wonderworking Hawaiian Icon in St. John the Baptist Cathedral. A multitudinous gathering of the faithful, with hope in the aid of the Mother of God, were anointed with holy myrrh.

On Friday evening, another moleben was served before the icon, this time for those departing on Saturday for Holy Trinity Monastery, to the grace of the chosen one of the Mother of God, José Muñoz Cortés.

May the angels accompany you, dear pilgrims!