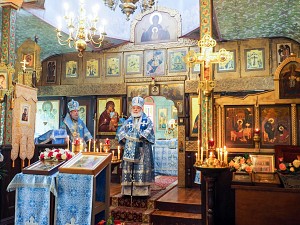 On Wednesday, September 21, the great feast of the Nativity of the Most Holy Theotokos, the eponymous parish at the New Kursk Root Hermitage in Mahopac, NY celebrated its patronal feast day, while on Sunday, September 25, the traditional popular celebrations were held, with the arrival of guest and pilgrims.

On Tuesday evening, September 20, His Grace, Bishop Jerome, who labors at the Hermitage, officiated the litia and polyeleos at the festal All-Night Vigil. Wednesday morning saw the solemn greeting of His Grace Theodosius, Bishop of Seattle, who had come from the Synodal Headquarters in New York City. Concelebrating with the hierarchs at Divine Liturgy were: Archpriest Dimitri Jakimowicz (rector of St. Nicholas Church in Stratford, CT), Priest George Temidis (rector of the Hermitage), parish Deacons Alexey Pnev and Konstantin Aleshin, and Deacon David Dutkanicz (cleric of St. Nicholas Church in Stratford).

Bishop Theodosius delivered a sermon in which he spoke about the significant of the feast of the Nativity of the Mother Holy Theotokos for each Orthodox person, and spoke in detail about the early years of the life of the Theotokos, saying, in part:

"It is also surprising that St. Anna came from the house of Aaron, while Joachim came from the house of David – that is, the service of the kings and the service of the clergy were united in this moment of the nativity of the Daughter of God. There was even an ‘annunciation’ to her parents as to when the Virgin Mary was to appear. Joachim brought his gits to the Temple in Jerusalem, but he was turned away by the clergy, who told him to stand at the end of the line, as Joachim had no children and he was scorned by those around him. He went away into the desert to pray to the Lord and ask His forgiveness. The Archangel Gabriel, Commander of the Heavenly Hosts, appeared to him and said that that which he had been asking of the Lord for 50 years around be granted.

"Sometimes, we cannot even ask for several days that which we wish to receive, while Joachim and Anna had such endurance that they prayed for 50 years for the same thing; and if they had not prayed for it, then it would not have happened. Sometimes, we lack the patience to pray, or forget to pray for our sick relatives, for ourselves, for those who have passed away. But this couple prayed to the Lord for 50 years! Anna, not knowing what had happened with Joachim, was at that time in Nazareth. She entered the courtyard and saw a nest filled with recent hatchlings, and thanked the Lord that He had granted a chance at life to these chicks, and also prayed that the Lord might visit her. And she received a vision of the Archangel of the Lord Gabriel, who told her that God would give them a child.

"Later, when Joachim and Anna were in their home in Nazareth, the Lord sent them a child. Let us also not forget to direct our prayers to the Most Pure Virgin Mary, asking her intercession, protection, the sending down of the help each one of us requires in this day and age and, most importantly, the salvation of our soul.

After Liturgy, the sisterhood treated everyone to a bountiful lenten luncheon. The guests walked to the cemetery and the lake, site of a small chapel built by the founder of the New Kursk Root Hermitage ‒ Archbishop Seraphim (Ivanovo; +1987) ‒ and consecrated in honor of the Icon of the Mother of God "of the Passion."

The popular celebration of the New Kursk Root Hermitage’s patronal feast took place several days later, on Sunday, September 25, the Leavetaking of the Nativity of the Most Holy Theotokos.

On a bright Sunday morning, clergy and worshippers from New York, Connecticut, and New Jersey began to arrive. At 9:30, the solemn greeting of Archbishop Gabriel of Montreal & Canada, who arrived from Synod, took place to the peal of bells. Long-time parish treasurer Vyacheslav Maltsev greeted His Eminence with bread and salt. Concelebrating with Archbishop Gabriel and Bishop Jerome were Archpriest Alexander Donchenko (rector of St. Nicholas Church in Poughkeepsie, NY) and parish clergy: Frs. George, Alexey, and Konstantin.

The parish of St. Nicholas Church in Poughkeepsie traveled to Mahopac to celebrate their patronal feast together. According to established tradition, both parishes visit one another for their respective feasts.

In his sermon, Archbishop Gabriel spoke about the feast of the Nativity of the Most Holy Theotokos, about the Church calendar according to which all of pre-Petrine Rus’ lived at one time, about the sorrows of Sts. Joachim and Anna on account of their childlessness, about how, by their prayers, the Lord sent them a child – the Virgin Mary ‒ and about the responsibilities of parents in these complex times to raise their children in Orthodoxy, in the Church, and in piety.

The clergy and pilgrims went in solemn procession around the church, after which Archbishop Gabriel offered several warm words about the Hermitage: "The New Kursk Root Hermitage is an historic place for our Church Abroad… I remember when I first came to America in 1980 to study, many parishes would close on this day; there was a directive to this effect from the Synod, and parishes in New York, Connecticut, and New Jersey would come here for the feast. I remember once when I came here, our Metropolitan ‒ at the time, Philaret (Voznesensky; +1985 – ed.) ‒ served in the summer church, which served as the altar, while all of the people stood outside. There was a sea of people who had come to this popular celebration. Our Protectress – the Kursk Root Icon ‒ was here for the feast. It would be good to resume this tradition."

"Otrada" Benevolent Society donated a large sum to the parish for the restoration of icons.

The luncheon organized by the sisterhood, parishioners, and guests was a great success. People sat and talked, walked to the chapel by the pond and to the newly constructed belfry in front of the church. Thus the patronal feast days of the New Kursk Root Hermitage passed warmly and joyously. 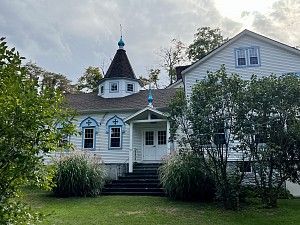