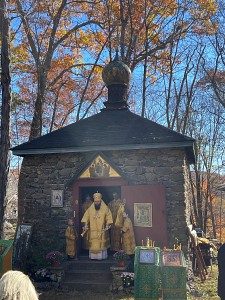 On Saturday, October 29, the feast of the Holy Martyr Longinus the Centurion, Metropolitan Nicholas of Eastern America & New York visited the Chapel of St. Sergius in Churaevka, Southbury, CT. His Eminence was greeted with bread and salt.

The Liturgy was especially beautiful in the open autumn air, in the woods, and the people stood firm, even though it was a clear, frosty morning, while the unified choir sang enthusiastically under the direction of the choir director Nicholas Semyanko. The trio ‘Eis Polla’ by Bortniansky was first sung by a children’s choir, and in the end, by the women’s trio.

Metropolitan Nicholas noted in his sermon that everyone began to feel warmer and better toward the end of Liturgy, and that the Holy Fathers also said, that when it is dark, or difficult, one must only pray, be patient, and everything will improve. He called upon everyone to follow the example of St. Sergius, and as the venerable Saint gathered faithful around him, we too, if we live not for our own pleasure, "by our life, our good word, and our prayer can gather others around us and, more importantly, around, where there is faith and salvation and God." The Metropolitan also said to take the example of the Holy Martyr Longinus the Centurion, who expressed his faith in Christ in both word and deed, that we not hide or be shy, but confess our Lord Jesus Christ, the Son of God, risen from the dead.

Fr. Constantine thanked the Metropolitan for his archpastoral visit to St. Sergius Chapel in Churaevka, and expressed hope to serve here more often, noting that the centennial of the building of the chapel was approaching.

Tables and food then ‘magically’ appeared, and a bounteous feast was provided. 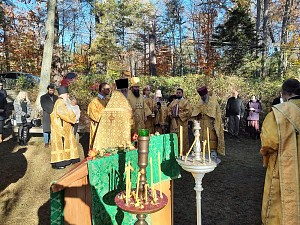