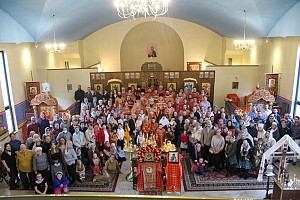 For holy art Thou, our God, and Thou restest in the saints, and unto Thee do we send up glory!
‒ Matins exclamation following the Prokemenon

The faithful rejoice in the saints, those in whom God abides, and the Holy Orthodox Church solemnly celebrates their memory with love. The parish of St. George in Loveland, OH, a suburb of Cincinnati, lovingly kept their patron’s memory with such a celebration to mark the feast of the Dedication of the Church of the Great Martyr George in Lydda, on Wednesday, November 16, 2022 ‒ the community’s 34th anniversary.

His Eminence Nicholas, Metropolitan of Eastern America & New York, First Hierarch of the Russian Orthodox Church Outside of Russia, arrived for the All-Night Vigil on the eve of the feast and was greeted by a host of local and visiting clergy.

Prior to the start of Vigil, Metropolitan Nicholas blessed the parish’s new altar table and its carved wooden vestment with Holy Water. Expertly built by John Sanderson, this beautiful church furniture was donated in memory of Simeon Astahoff (+2019) by his wife Olga and her children, Michael Astahoff and Natalia Bobrovsky (husband Michael). Simeon Astahoff was Bishop Nicholas’ godfather and Olga Astahoff is his aunt. The installation of this altar table is the next step toward the Great Consecration of the church, which is planned for May 2028, a few months after the parish, with God’s help, intends to pay off its mortgage. The parish also commissioned an icon of Simeon’s patron, Venerable Symeon the Stylite, to adorn the church. Painted by Protodeacon Paul Drozdowski, it was blessed with holy water that afternoon in advance of Vigil.

Having completed the blessing of the new altar table, the festal Vigil commenced. His Eminence, Metropolitan Nicholas, served the litia in honor of St. George and led the magnification of the Great Martyr, accompanied by eight priests and four deacons. Under the direction of Larissa Sander, Chairman of the Diocesan Liturgical Music Committee and the parish’s weekday choir director, the St. George choir skillfully and prayerfully sang the responses. The parish sisterhood hosted the visiting clergy and singers for a meal in the parish hall after the service.

Responses for the hierarchical Liturgy were conducted by Reader Lawrence Sander and sung with inspiration by the St. George parish choir and several guest singers. Having prepared through Holy Confession, more than 100 of the faithful partook of the Life-Giving Mysteries of Christ. Liturgy was followed by a short moleben to St. George. The services concluded with a joyous "Many Years" intoned for Metropolitan Nicholas and all of those gathered in prayer.

The parish sisterhood prepared an abundant festal meal, under the direction of Head Sister Svetlana Pinkerton. The gathered guests lingered into the afternoon, savoring the joy of the feast and the grace of the Holy Spirit which rests in St. George. Thanks be to God and to St. George! 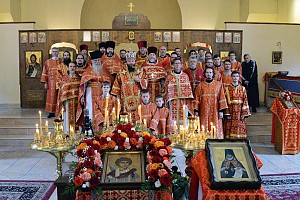