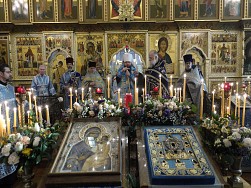 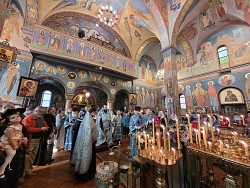 Eight years ago, the ever-memorable Metropolitan Hilarion blessed for the Protectress of the Russian Diaspora – the wonderworking Kursk Root Icon of the Mother of God – to visit Washington, DC during the Thanksgiving holiday (the end of November). Every year, the icon was brought by Bishop Nicholas – now Metropolitan and the new First Hierarch of ROCOR.

This year, the icon arrived in the American capital on Wednesday evening, November 23, the eve of that wonderful American civil holiday – Thanksgiving.

On Thursday morning, November 24, the very day of the feast, parishioners of the capital’s St. John the Baptist Cathedral gathered to greet the icon and their new Primate. At the entrance to the cathedral, the Metropolitan was greeted with bread and salt by the assistance warden, Lazar Aliev. In his welcome, Lazar congratulated Metropolitan Nicholas on his election to that lofty post and asked him to pray for the further prosperity of the parish, founded by the Holy Hierarch John of Shanghai & San Francisco.

Having vested in the altar, the Metropolitan came out onto the cathedra in the center of the church and pronounced the first exclamation of the thanksgiving moleben, served together with an akathist to the Mother of God. Serving alongside him were parish rector Archpriest Victor Potapov, Archpriest Serge Kotar (cleric of Holy Trinity Monastery in Jordanville, NY), Priest Damian Dantinne, and Protodeacons Leonid Mickle and Patrick Mitchell (cathedral clerics). The service was adorned with the beautiful singing of the cathedral choir in English and Church Slavonic under the direction of conductor Paula Genis. A multitude of worshippers sang along with the choir.

On a second analogion, next to the Kursk Icon, was placed an exact copy of the myrrh-streaming Montreal Iveron Icon of the Mother of God, as that day marked the 25th anniversary of the finding of that wonderworking image, which had been entrusted by the Mother of God to the care of the murdered José Muñoz-Cortés. The "Washington" copy of the Montreal Icon was painted at the private initiative of the now-reposed Athonite Hieromonk Chrysostomos on the first anniversary of Brother José’s death. It is to the brush of Fr. Chrysostomos that the myrrh-streaming Montreal Icon also belongs, which had been guarded for 15 years by Brother José. Currently, this copy of the Montreal Icon resides in St. John the Baptist Cathedral in the large kiot in which Brother José kept his own Athonite icon.

At the end of the service, Metropolitan Nicholas delivered a short didactic sermon dedicated to the Mother of God, which can be heard here.

After the service, worshippers were invited to the parish hall for a luncheon, during which God’s people had the opportunity to interact with one another and congratulate the Metropolitan with his new office.

On Saturday, November 26, His Eminence departed for his residence in New York City, while the Kursk Icon was taken to Holy Transfiguration Church in Baltimore, MD. Here, rector Archpriest Ion Barbus served a moleben and akathist to the Mother of God.

At 5:00 PM, the icon was returned to St. John the Baptist Cathedral for the start of the All-Night Vigil. The presence of this great holy relic attracted many people to church. Throughout the entire Vigil, worshippers came to confession in order to prepare to receive Christ’s Holy Mysteries the following day.

On Sunday, November 27, the icon was present for the early English and later Slavonic Divine Liturgies.

On Monday morning, Fr. Victor took the icon to two ailing parishioners. That same evening, the Kursk Icon was taken to St. Thecla Parish in the capital suburb of Kensington, MD.

On Tuesday, November 29, the wonderworking icon visited Holy Apostles Church in Beltsville, MD, where rector Archpriest George Johnson and other parish clergy served a moleben and akathist to the Mother of God.

On Wednesday, November 30, the icon once again visited St. John the Baptist Cathedral, where an akathist to the Theotokos was again served.

On Thursday, December 1, the Kursk Root Icon was received by the parish of St. Nina and the Holy Innocents in Bristow, VA.

On Friday morning, December 2, Fr. Victor and his matushka took the wonderworking icon to the Synod of Bishops in New York City. Metropolitan Nicholas greeted the travelers cordially in his residence, where he received Fr. Victor’s report of the icon’s visitation to the Washington area over lunch.

Having thanked the First Hierarch for the honor of an entire week with the great holy icon, the travelers departed for home.

Glory to God, Who has shown us such bountiful mercy! 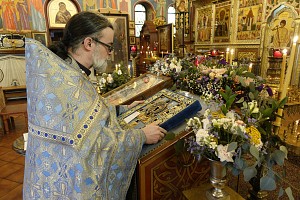