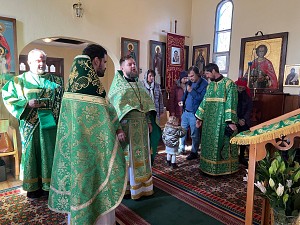 Abbot Tikhon (Gayfudinov), rector of the skete, said that when the decision was made to transform the defunct parish into a monastic community, Metropolitan Hilarion proposed choosing a Heavenly patron for the skete brotherhood, just as was done in Jordanville, where the brethren chose Venerable Job of Pochaev as their patron. After prayerful deliberation, it was decided to name the brotherhood after Venerable Barlaam of Khutyn – a saint who lived in 12th century.

Upon conclusion of Liturgy, Fr. Tikhon thanked the clergy for coming to the skete to pray and share in the joy of the feast. He spoke about the Heavenly patron of the brotherhood, saying, in part:

"Today we celebrate the feast of our holy and God-bearing father Barlaam of Khutyn, abbot of the Khutyn Monastery and wonderworker of Novgorod… his life is so instructive, so educational for us… he, being a young man, leaves everything, his entire future, to go far away, into the wilderness, to a "meager place," leaving everyone behind, and lives there for decades, alone, in the forest…

"What can we learn from Venerable Barlaam of Khutyn? Do we learn that we need to leave all of our affairs and go away into the woods? Probably not. At least because we are already surrounded by an impenetrable forest – it is all around us, we do not even have to go out into it. Because we have been so surrounded by our daily affairs and concerns that we walk through this earthly life as though in a dense forest, as though we see no clearing.

"But there is a clearing. As you walk through this forest, at some point the Lord will give you His blessing, and suddenly you will see that small, far-off little cell – the cell of Venerable Barlaam of Khutyn. And let his prayers, his instructions, show you the way out, the way into the light, the way whither is the grace and mercy of our Lord and God and Savior Jesus Christ. Amen."

A fraternal meal was held in the monastery refectory, during which those present were able to share spiritual conversation 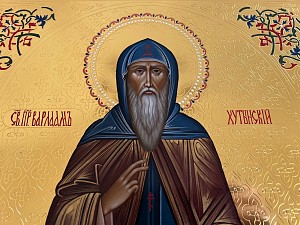