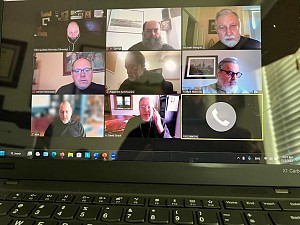 On Friday, December 2, the Eastern American Diocesan Council held its regular quarterly meeting in a remote online format. The Council had a busy agenda and met for over three hours, under the presidency of His Eminence Nicholas, Metropolitan of Eastern America & New York, First Hierarch of the Russian Church Abroad.

Metropolitan Nicholas opened the meeting and, after a prayer, welcomed the Council members, acknowledging the latest changes in the Diocese, with His Eminence as the new ruling hierarch and with Priest George Temidis as Secretary of the Diocesan Administration. His Eminence stressed that the main goal of the administration and clergy remains the same: the salvation of souls and preserving and spreading the Orthodox Faith.

The Council reviewed a variety of topics related to life in the Diocese, end-of-the-year financial reports, and approved a budget for 2023. The parish tithes and dues report was very encouraging, with many parishes increasing their participation. The Media Office provided an update and reported on the increasing number of visitors to the diocesan website, as well as the useful resources added to the site regularly. The Council discussed plans for the upcoming Lenten clergy retreats and the Diocesan Assembly that will take place in 2023.

The Council approved several updates to diocesan policies and procedures. Council members also discussed and approved financial support to the St. Herman Youth Conference and expressed hope that many of our parish youth will participate in this valuable endeavor.

The Diocesan Council scheduled its next meeting for Friday, February 3, 2023.