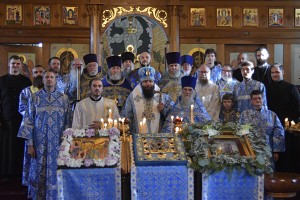 On Monday the 5th and Tuesday the 6th of December, the feast of the Holy Right-Believing Great Prince Alexander Nevsky, Metropolitan Nicholas of Eastern America & New York paid an archpastoral visit to St. Alexander Nevsky Memorial Church in Richmond, ME, where he officiated the divine services in honor of the parish’s patronal feast.

His Eminence arrived on Sunday evening, December 4, accompanied by the Protectress of the Russian Diaspora – the wonderworking Kursk Root Icon of the Mother of God. On Monday, he was able to visit two homes in the parish, blessing each home with the presence of the icon and a short moleben.

The hierarchical All-Night Vigil began with the clergy and the faithful meeting the Kursk Icon and the First Hierarch of the Russian Church Abroad, processing into the church with the joyous singing of the troparion of the icon. Vigil was served with the choir and clergy singing in English and Slavonic. The service was well attended.

At the Sixth Hour, Peter Paul Doughty was tonsured a reader for St. John the Russian Church.

At the Little Entrance, Fr. Andrei Rudenko was awarded the palitsa.

After the dismissal, His Eminence delivered a homily enumerating the many blessing evident in the community and speaking of the great blessing of the presence of the Kursk Root Icon, and the prayers of St. Alexander Nevsky for the community.

Following the homily, the Metropolitan congratulated the visiting and local clergy, the parish council and the choir for their great labors in the church. He also presented Alexey Gomartely and his wife Alla gramotas for their labors in the church and amongst the congregation. Fr. Chad Williams was presented a commemorative jeweled cross marking the 725th anniversary of the Kursk Root Icon and the centennial of ROCOR.

The Protodeacon intoned the Polychronion, and group photo was taken of the clergy.

After Liturgy, all were invited to a festal banquet, with about 100 parishioners and visitors in attendance. At the banquet, Fr. Chad expressed gratitude for all of the laborers who put forth many hours of service to prepare the services and the banquet, and for the blessing of a new deacon in the parish. Metropolitan Nicholas then spoke, commending the congregation on its spiritual life and urging all to service in the Body of Christ unto the salvation of our souls.

His Eminence took his leave with the Kursk Root Icon, while members of the congregation once again sang the troparion of the icon. 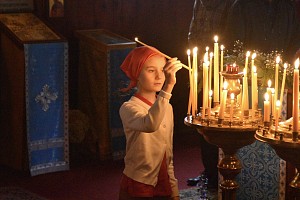