New York City: Feast of Kursk Root Icon of the Mother of God in Synodal Cathedral 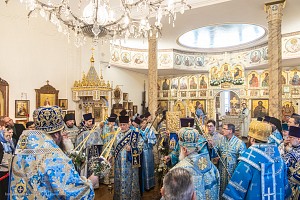 On Friday the 9th and Saturday the 10th of December, after the Synod of Bishops completed its regular session, festal divine services were held in the Synodal Cathedral of the Sign in New York City in honor of the cathedral’s patronal feast – that of the Kursk Root Icon of the Mother of God "of the Sign."

In keeping with tradition, the expanded Synodal choir sang the divine services marvelously, under the direction of conductor Vadim S. Gan.

At the Little Entrance, for his many years of dedicated service to the Holy Church, Abbot Zosimas (Krampis; rector of the Synodal English Mission) was awarded the right to wear the palitsa.

The festal Liturgy was held under the aegis of two wonderworking holy icons: the Protectress of the Russian Diaspora – the Kursk Root Icon of the Mother of God ‒ and a revered copy of the Pochaev Icon of the Most Holy Theotokos, brought from Jordanville.

A multitude of the faithful from several states prayed at the celebratory services in the cathedral; virtually all of them communed of Christ’s Holy Mysteries.

Upon completion of Liturgy, Archimandrite Elevferiy (Skiba) addressed the worshippers with a sermon, in which he spoke about the miracles associated with the Kursk Root Icon during times of misfortune, calamity, and temptation in the Russian land.

The hierarchs and clergy served a short moleben before the Kursk Icon.

Metropolitan Nicholas then greeted all with the patronal feast of the main cathedral of the Russian Church Abroad, thanking the clergy, assistants, and parishioners of the cathedral who labored in organizing such a wonderful feast, as well as the pilgrims from various states who came to share in the celebration with them.

"Today we prayed with particular emotion for Metropolitan Hilarion. This is the first year that he has not been with us at this feast. But he is in the heavens and rejoices that we continue this holy, prayerful work of the Church. Toward the end, despite his illness, he gave all of himself to the service of the Church."

Metropolitan Nicholas announced that the Synodal had taken note of the labors of Metropolitan Hilarion’s special assistant, who showed love and attentiveness during his final days, and "for his attentiveness in fulfilling his obedience as cell attendant and personal assistant to Metropolitan Hilarion, and in connection with the patronal feast of the Cathedral of the Sign, Hierodeacon Panteleimon (Jigalin) is awarded the Synodal Order of the Kursk Root Icon of the Mother of God, 3rd Class."

With the blessing of Metropolitan Nicholas, a plate collection was held in the cathedral. The gathered funds ‒ $2,000 ‒ will be given to refugees from Ukraine in need.

A festal banquet was then held in the cathedral hall. 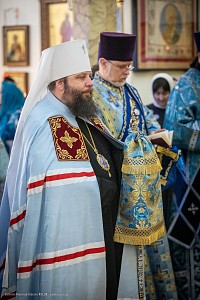