New York State: Pilgrimage by Rector, Brethren of Our Lady of Pochaev Church 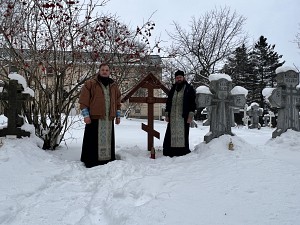 With God’s help, on Thursday, December 22, the brethren of Our Lady of Pochaev Church in North Port, FL, led by the rector, Archimandrite Stefan (Khilchuk), visited the First Hierarch of the Russian Church Abroad, His Eminence, Metropolitan Nicholas, as well as the Jordanville and Novo-Diveevo monasteries in New York State.

The delegation first arrived at Holy Trinity Monastery in Jordanville, where there are a great many holy items and relics of saints of the Kiev Caves, as well as Venerable Job and Amphilochius of Pochaev. They also venerated the monastery’s great holy icon – an exact copy of the wonderworking Pochaev Icon of the Mother of God, which was especially important, as it is in its honor that the church in Florida is named.

After Liturgy, a panihida was served at the grave of the ever-memorable Metropolitan Hilarion (Kapral; +2022). Metropolitan Hilarion’s involvement was especially important for the brethren and the parish, inasmuch as His Eminence had initiated the community’s founding and gave it its name. Likewise, on this day three years ago, Metropolitan Hilarion performed the monastic tonsure of parish cleric Hieromonk Arkadii (Polishchuk).

The pilgrims then visited Holy Dormition Convent "Novo-Diveevo" in Nanuet, NY, where they venerated the holy icons and relics and spoke with the nuns living there.

At the end of the day, they arrived at the Synod of the Russian Church Abroad. At the Synodal Headquarters, they met with the new First Hierarch, Metropolitan Nicholas. His Eminence warmly greeted the brethren, hosted them for dinner, and spoke with them at length, during which he expressed his interest in the life of Our Lady of Pochaev Church and the issues facing its community. In bidding them farewell, the Metropolitan assured the brethren of his prayers, and gave his fatherly blessing to the church in the gift of the Chelm Icon of the Mother of God (from the private collection of Metropolitan Hilarion).

It is also anticipated that, during the visitation of the Kursk Root Icon of the Mother of God to Florida, accompanied by Metropolitan Nicholas, the holy icon will visit Our Lady of Pochaev Church in North Port.

This will take place on Thursday, January 26, at 5:00 PM, when the Metropolitan will serve a moleben and akathist to the Mother of God.

The brethren of the parish invite all to join in common prayer with the First Hierarch to the Most Holy Theotokos. 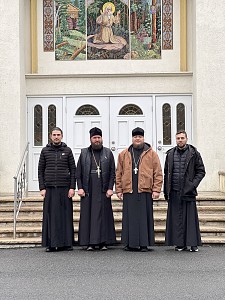 New York State: Pilgrimage by Rector, Brethren of Our Lady of Pochaev Church - 12/22/22