New York City: Nativity of Christ in the Synodal Cathedral of the Sign 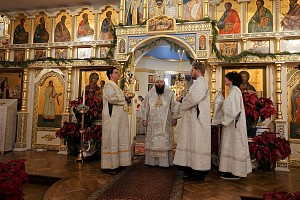 On Saturday, January 7, the great feast of the Nativity of Christ, a multitude of parishioners and faithful from other churches in the city gathered in the cathedral; in comparison with past years, many more families were in attendance with their children. All came to express their love for the newborn Divine Infant Christ. On the very day of the feast, Metropolitan Nicholas celebrated Divine Liturgy, co-served by the above-mentioned clergy, excepting Abbot Zosimas, who served Liturgy in the lower St. Sergius Church for the English-speaking flock.

Both services were held under the aegis of the Protectress of the Russian Diaspora – the wonderworking Kursk Root Icon of the Mother of God.

Virtually all of the worshippers communed of Christ’s Holy Mysteries.

Upon completion of Liturgy, the cathedral dean read aloud the Nativity epistle of the First Hierarch of the Russian Church Abroad.  Metropolitan Nicholas greeted everyone present with the radiant feast of Christ’s Nativity and said, in part: "Christ comes to earth in order to give man the opportunity to commune with Him, to unity with Him. The Lord God does this for us. That is why it is so joyful to see so many of you in church today."

His Eminence called on the faithful to come to church more often, to interact with God in prayer, to glorify the Mother of God, and to pray to the saints.

In the church hall, the cathedral sisterhood organized a festal luncheon for all, during which fraternal interaction between the clergy and faithful continued.

New York City: Nativity of Christ in the Synodal Cathedral of the Sign - 01/07/23