North Port, FL: Nativity in Our Lady of Pochaev Church 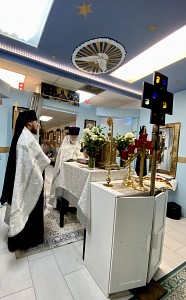 The joyous feast of Christ’s Nativity was prayerfully celebrated in Our Lady of Pochaev Church in North Port, FL.

Preparation for the feast began well in advance. The church was adorned with a Christmas tree, garlands, and other decorations. But the centerpiece adorning the church was the Stable. The tradition of decorating churches and homes in the style of a stable comes from ancient times. As a rule, the set-up is meant to resemble the cave (or stable), where the Divine Infant Christ was born. Also usually present are either depictions or figures of all who were participants of the Christmas story, starting with the manger and Infant and ending with the shepherds, magi, and animals.

Such a stable was constructed by Hieromonk Arkadii (Polishchuk; parish cleric). The stable was placed in the center of the church, along with the festal icon on an analogion.

On Friday, January 6, in keeping with the rubrics for the Eve of Nativity, Fr. Arkadii served the Royal Hours and celebrated the Divine Liturgy of St. Basil the Great. That day, prayers were also offered up for the repose of the ever-memorable Metropolitan Hilarion (Kapral; January 6 being his birthday).

That evening, Vigil ‒ comprising Great Compline and Matins – was served. A traditional lenten meal was served after Matins.

The festal Nativity Liturgy, in keeping with recent practice, was celebrated at night. Virtually the entire church communed of Christ’s Holy Mysteries. After the service, a festal meal was served, during which Christmas carols were sung.

January 8 marked the Sunday after Nativity – that of the Holy Kinsmen of God ‒ and the Synaxis of the Most Holy Theotokos. Divine Liturgy was celebrated in the church.

After the services, a Christmas festival was held next to the church. This is the first event of its kind being organized by the brethren of Our Lady of Pochaev Church. At 3:00 PM, parishioners and guests took their places near the stage in the parking lot in front of the church. Parish rector Archimandrite Stefan (Khilchuk) addressed those present with a word of welcome.

After the main part of the show, all of the festival guests were offered a repast, prepared over a fire: Uzbek pilaf, shish kabob, hot dogs, and salads.

Joyous interaction and acquaintance were had. For the youngest participants, various children’s activities were organized. Finally, Santa Claus arrived to reward all of the children with presents.

The festival concluded with a fireworks show.