On Sunday, January 15, Holy Virgin Protection Russian School in Nyack, NY held its annual Yolka celebration. As in years before, the children of the school diligently worked since October to present the play "By the Wish of the Pike," a fanciful morality play representing the importance of honesty and good deeds by your own hands.

However, this year was something different; not only was this the first Yolka after all COVID restrictions were lifted, but the parish and school were honored and overjoyed to have Metropolitan Nicholas of Eastern America & New York join as the guest of honor. Children greeted His Eminence at the door with the traditional bread and salt before the start of the festivities, and gave him several unique gifts, including a hand-painted greeting for the feast of Christ’s Nativity.

The event began with a word from the director of the school, Archpriest Elias Gorsky. He welcomed His Eminence and all attending and stressed the important role the school plays in the growth of our youth in the fostering of, most importantly, the Orthodox Faith, which is so closely linked to Russian culture. The play itself, directed by Irene Serdseva and Lena Aksionova, two of the school’s long-time teachers, featured all of the children of the school in some role, even the youngest of students. All of the dances were choreographed by Julia Winward, another of the school’s teachers and School Secretary, which added to the splendor, energy, and joy of the play. At the end, bouquets of flowers were given in thanks to all the principal creative and technical staff.

Metropolitan Nicholas then spoke of the importance of this celebration, of God Himself coming to earth for our salvation, the joy of the holiday, and the important spiritual need for such parochial schools. He said that Yolka this year comes on the feast day of Venerable Seraphim of Sarov, and that the saint from his very youth was close to God, and in this, it is our mission with such schools to promote the youth to be close to God. He thanked the clergy, staff, and all volunteers for all their efforts on behalf of the Russian School and gifted the school with an icon of the Synaxis of all the icons and feasts of the Most Holy Theotokos, which belonged and was previously in the office of the ever-memorable Metropolitan Hilarion (Kapral).

The hall was filled with guests and parents, along with the youngest of the youngest, watching in awe at the production before them. There were so many children present, that when it came to the traditional horovod around the large tree in anticipation of the coming of Grandfather Frost, two horovods, one inside the other, were needed, or else no space would remain in the hall. Once Grandfather Frost made his appearance, all of the children crowded around him, speaking to him and being given presents.

Metropolitan Nicholas stayed to the end, mingling with parishioners and parents. He expressed his appreciation of the event and joy felt by all and was thankful that he was able to participate and celebrate with the Nyack Russian School. 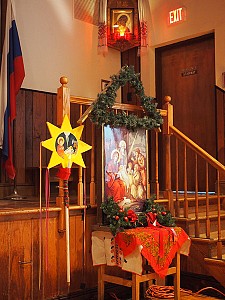