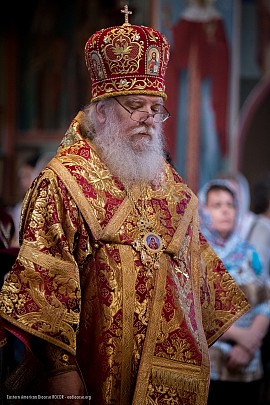 Bishop Luke (Murianka) was born on November 10, 1951 in Philadelphia, PA to an Orthodox Rusyn family of émigrés from Carpatho-Russia. In his childhood he attended the church of Archangel Michael in Philadelphia, belonging at the time to the North American Metropolia. During his studies at Hartwick College in Oneonta, NY (graduated in 1973), he frequented Holy Trinity Monastery in Jordanville. During this time, he decided to become a monastic, and with the consent of his parents, entered Holy Trinity Theological Seminary in Jordanville. Upon entering the monastery, he submitted a petition to be accepted to the monastery brethren. In 1976, the feast of St. Moses the Hungarian, the monastery rector, Bishop Laurus (Škurla) of Manhattan tonsured him a novice, fulfilling his obedience in the book-binding and icon painting workshops.

In 1980, Archbishop Laurus tonsured him into the Lesser Schema and given the name Luke in honor of the Holy Apostle and Evangelist Luke. On July 12, 1981, he was ordained a hieromonk. In 1978, he graduated from Holy Trinity Seminary. From 1979, he taught apologetics, the New Testament, creed and comparative theology. He held the post of inspector of the seminary, and later – its dean. In 1981 he graduated from the University of Syracuse (New York State). He worked on a doctoral degree at the University of New York at Albany. In the Holy Trinity Monastery for several years he performed the obedience of the dean, and later became the spiritual father of the monastery.

In 2007, he entered the scientific and editorial board created by the Moscow Theological Academy and the Institute of General History of the Russian Academy of Sciences to work on the fundamental research "History of the Russian Orthodox Diaspora." On May 21, 2008, he was elected abbot of Holy Trinity Monastery; on September 6 of that year, by the decision of the Synod of Bishops of ROCOR, he was appointed rector of Holy Trinity Seminary. In January 2009, he was a delegate to the Local Council of the Russian Orthodox Church representing the monastics of the Eastern American Diocese. On May 5, 2009, by the decision of the Council of Bishops, he was included in the commission formed at the same time, on dialogue with the Orthodox Church in America.

On December 6, 2018, by the decision of the Synod of Bishops he was elected Bishop of Syracuse, Vicar of the Eastern American Diocese. On December 28, this decision was approved at a meeting of the Holy Synod of the Russian Orthodox Church (Journal №116).

He was nominated a bishop on February 11, 2019, and consecrated on February 12 during the divine services in Holy Trinity Monastery led by Metropolitan Hilarion of Eastern America & New York.