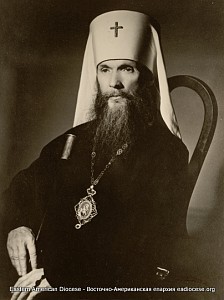 Metropolitan Philaret, was born George Nikolaevich Voznesensky in Kursk on March 22, 1903. His mother, Lidia Vasilievna, died when George was only 18 years old, while his father, soon thereafter accepting monastic tonsure under the name Dimitry, became an archbishop. In 1947, his father was repatriated to the USSR, where he died shortly thereafter.

Metropolitan Philaret’s family moved to Blagoveschensk, on the Amur River, in 1909. In 1920, he completed the eight-grade gymnasia. Moving with his family to Harbin, he entered the Russo-Chinese Polytechnic Institute and graduated it an electromechanical engineer in 1927. In 1931, he completed the pastoral theology courses, soon thereafter renamed the Theology Department, at the University of St. Vladimir. He would later become a professor of New Testament, Pastoral Theology, and Homiletic studies at the same. In 1930, he was ordained to the diaconate, and in 1931 was tonsured a monk under the name Philaret. A year later, he was ordained a Hieromonk, in 1933 – elevated to the rank of hegumen, and in 1937 – to the rank of archimandrite.

One of Vladyka’s university colleagues recalled: "Archimandrite Philaret did great work advancing Church activities and pastoral homiletics. Worshippers would seek to attend whatever church he was serving in. He was beloved by every class of Harbin’s Orthodox population. The name of Archimandrite Philaret was renowned even beyond the confines of the Harbin Diocese. He was kind, and accessible to all who approached him. And that was a great many people. People who went to him knew that they would receive proper advice, as well as comfort and help. Archimandrite Philaret was very strict with himself; he was known as a true ascetic. Our kindhearted Vladyka also had a very rare kind of memory. When one would meet him, he would express great interest in every facet of one’s life; he felt no need to remind anyone of his own needs or difficulties, but would develop any topic of conversation, and was ready to answer any question."

When Soviet forces occupied Manchuria, Archimandrite Philaret decisively refused to accept a Soviet passport. When a newspaper reporter came to interview him, asking what he thought of "the wise decision on the part of the Soviet government to offer the Russian population of Harbin the chance to reestablish the citizenship of their homeland," he heard the following courageous response: "I do not consider accepting Soviet citizenship possible, and will not do so, until such time as I will not have confirmed by the facts, and 100% without a doubt, that the persecution of religion, antireligious propaganda, and attacks on servants of the Church have ceased entirely, and that the Church, which did not 'secede,' but was banished by the government, has once more taken its rightful place." Until the end of his days in China, Archimandrite Philaret never accepted Soviet citizenship, despite the danger inherent in taking such a position. Another time, Archimandrite Philaret was disciplined for his boldness. Once, having discovered a church newsletter in which Lenin was counted among the geniuses and benefactors of mankind, Archimandrite Philaret expressed his indignation in a sermon, which received widespread notoriety.

His fearless denunciations of the theomachist Communists inspired a particular hatred within them, and they decided to burn Archimandrite Philaret alive, lighting his monastic cell on fire. But the Lord preserved His chosen one: although with severe burns, Vladyka escaped the fiery trap alive.

At all times working to defend his flock, he, in his own words, “never sullied my lips and my prayer with prayers for the servants of Antichrist,” despite multiple threats. Additionally, Archimandrite Philaret also exchanged correspondence with the head of the Russian Church Abroad, Metropolitan Anastassy, ignoring the dangers implicit in doing so.

The Synod of Bishops tried long and hard to receive a visa for him to exit China, and, judging by available archived correspondence, almost every diocese of the Church Abroad hoped to get him for itself. Only in 1962 was the Synod of Bishops able to get Archimandrite Philaret to Hong Kong, from whence he was able to quickly get to Brisbane. A large portion of his former parishioners had gathered in Australia, and upon his arrival there, with a great many signatures, they petitioned the Synod to appoint him bishop of that city. The petition was enthusiastically supported by the already ailing Archbishop Savva, and in 1963 Archimandrite Philaret, to the joy of his former flock, became Bishop of Brisbane.

At the Council of Bishops in 1964, at which Metropolitan Anastassy announced his retirement, Bishop Philaret, having arrived in place of his ruling bishop, Archbishop Savva, was elected First Hierarch. The Council determined him to be the new Hierarch of the Russian Church Abroad, a burden he carried for 21 years.

As it happened, almost in the middle of the period of his rule, the Third All-Diasporan Council was summoned. Our faithful immediately recall the four great glorifications of God-pleasers: Righteous St. John of Kronstadt, Venerable St. Herman of Alaska, Blessed St. Xenia of St. Petersburg, and the Holy New Martyrs and Confessors of Russia.

Our First Hierarch appealed more than once with enlightening letters to the heads of other Churches, many of whom heeded his call. Vladyka was a remarkable preacher. Deep faith, fiery prayer, kindness and benevolence, concern for the continued, undisturbed spiritual peace and steadfast defense and confession of Truth – these were the primary characteristics of our First Hiearch, Metropolitan Philaret.

Vladyka reposed in the Lord on November 21, 1985, on the day of the Archangel Michael. His convictions were clearly expressed in his will. In the published Spiritual Testament, the Metropolitan said the following:

These words, taken from the sacred Book of the Apocalypse, have a particular significance in our time, in our greatly sorrowful, evil, temptation-filled days. They remind us of that priceless spiritual wealth that we possess, as children of the Orthodox Church.

Yes, we are rich. This spiritual wealth is that which the Holy Church possesses, and it is offered to all her faithful children. The teaching of the Faith, of our marvelous, salvific Orthodox Faith; the countless living examples of the lives of people who have lived according to the Faith, according to those lofty principles and rules that the Church offers us. Those who have attained that spiritual purity and exaltedness that is called holiness; the beauty and majesty of our Orthodox Divine services and a living participation in them through faith and prayer; the plenitude of the grace-filled spiritual life that is open to each and every one, and, crowning it all, the unity of the children of the Church in that love of which the Savior said: By this shall all men know that ye are My disciples, if ye have love one to another (John 13:35).

In 1998, it was decided to transfer the remains of the reposed First Hierarch from the crypt of the cemetery Church of Dormition to the new vault under the altar of the Holy Trinity Cathedral in Jordanville. When his tomb was opened on November 10, his relics were found to be incorrupt; he was a light color, and his skin, beard, and hair were completely preserved. Vladyka’s vestments, Gospel, gramota with the prayer for the departed, cross, and the shroud covering the departed’s face were all totally preserved. Even the white cloth used to cover the top of body had kept its radiant whiteness. Meanwhile, the metal clasps of the Gospel fell apart at a touch.

After the Divine Liturgy on November 21, then-Archbishop Laurus called upon all those gathered there to pray for the repose of the First Hierarch’s soul, until such time as God’s will should indicate he be added to the body of saints. A panihida was then served, after which a crucession with Metropolitan Philaret’s coffin took place around the cathedral to the tomb, where it was laid in its prepared place.