On Thursday, June 23, Deacon Herman Ricketts reposed suddenly in the Lord at his home in Johnstown, PA. He was 54. Originally from the East Coast, Fr. Herman moved to California and was ordained a deacon by Archbishop Kyrill of San Francisco & Western America on December 4, 2010, and was a cleric of Holy Virgin Protection Church in Hollywood, CA.

Not long after the untimely repose of his Matushka Katherine in 2012, he returned east and was attached as a cleric to Holy Apostles Church in Beltsville, MD. He also served in St. John the Baptist Cathedral in Washington, DC, of which he had been a parishioner prior to his move west.

Fr. Herman was a builder by trade, and led the construction – completed in 2005 – of the Montreal Iveron Icon of the Theotokos cemetery chapel at Rock Creek Cemetery in Washington. He will be buried not far from the chapel next to his matushka.

The funeral service will take place at St. John the Baptist Cathedral on Wednesday, June 29 at 6:00 PM. On Thursday morning, June 30 at 9:00 AM, a Liturgy for the departed and litiya will be served, followed by internment at Rock Creek Cemetery. After the burial, a potluck memorial repast will be held in St. John’s parish hall.

Memorial eternal to the servants of God Deacon Herman and Katherine! 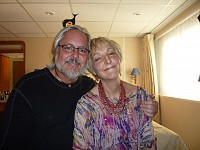