Port-au-Prince: "Humbler than Humble could be" – Metropolitan Hilarion visits Orthodox Mission in Haiti 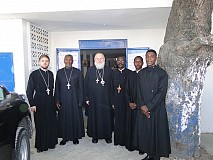 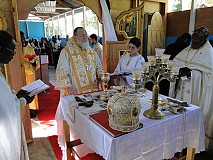 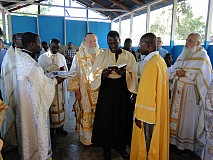 From Thursday the 22nd to Monday the 26th of January, Metropolitan Hilarion of Eastern America & New York, First Hierarch of the Russian Church Abroad, performed an archpastoral visit to the Orthodox Mission in Haiti. His Eminence was accompanied by Archpriest Alexandre Antchoutine (member of the Diocesan Council) and Hieromonk Tikhon (Gayfudinov; His Eminence’s cell attendant).

On January 22, the Metropolitan and representatives of the Eastern American Diocesan clergy arrived in the Haitian capital of Port-au-Prince, where they were greeted by Priests Jean Chénier-Dumais and Gregoire Legouté. That evening, the mission clergy held a dinner for His Eminence and those accompanying him.

The following morning, Metropolitan Hilarion, joined by Fr. Gregoire, began visiting the mission’s parishes and schools. His Eminence and accompanying clergy first visited the parish of the Nativity of the Mother of God (Раrоіsse Nоtre-Dаme-de-lа-Nativité) in Port-au-Prince, where Fr. Jean Chénier-Dumais is the rector. They also visited the parish’s elementary school, in which almost 300 students, ages 3-12, are enrolled. The school’s teachers are all volunteers – readers and parishioners of Notre-Dame Church. Despite the fact that many children in the student body are not Orthodox, the school offers Law of God classes. It is not rare for students and their parishes to convert to Orthodoxy.

Metropolitan Hilarion next visited the parish of Venerable Moses the Black (Раrоіsse Saint Moïse le Noir) in Fontamara, where Fr. Gregoire Legouté is the rector. The parish operates an elementary school for mentally and physically handicapped children, run by Matushka Rose Legouté. Among the 120 students, the majority of them have significant physical disabilities, and some are orphans. Taking into account the specific limitations of its students, the school offers the children not only the usual subjects and music, but also teaches them sewing and other tradecraft that these young people will be able to use in the future to earn a living.

In the second half of the day, Metropolitan Hilarion and the clergy, accompanied by Fr. Gregoire, headed to the city of Léogâne, home to the parish of the Holy Apostles Peter & Paul (Раrоіsse Saints Pierre et Paul), nourished by the Haitian Mission’s clergy. After becoming acquainted with the life of the community, His Eminence and the delegation traveled to Haiti’s south coast, to the city of Jacmel, roughly three hours’ drive from the Haitian capital. There, the Metropolitan and those accompanying him were greeted by the rector of the parish of Blessed Augustine (Paroisse Saint Augustin), Priest Augustin Gesnel. Fr. Augustin is finishing his final year at the Parish Theological Seminary (Moscow Patriarchate), where courses are taught in French. Recently, with the blessing of Metropolitan Hilarion, Fr. Augustin was ordained to the priesthood by Archbishop Michael of Geneva & Western Europe, to serve the Haitian Mission. Saint Augustin parish also operates an elementary school, enrolling around 120 students.

As it happened, in Jacmel at the same time was the Volunteers in Mission team, led by Archpriest John Moses, rector of All Saints Mission in Natural Bridge Station, VA. The eight-person team is working in Saint Augustin parish, helping with construction in the parish school and office, as well as helping rebuild the church building, which was destroyed during the 2010 earthquake.

On January 24, Metropolitan Hilarion, co-served by local and visiting clergy, led the evening services, and the following morning, on Sunday, celebrated the Divine Liturgy. During Liturgy, His Eminence elevated Reader Abraham Christoff to the rank of subdeacon, and then ordained him to the diaconate later in the Liturgy. Deacon Abraham will serve in the parish of the Holy Hierarch Irenaeus of Lyons (Paroisse Saint Irénée de Lyons) in Hinche. Also during the Hours, Metropolitan Hilarion tonsured Eustache Dubon and Cyrille L’amour readers, who will service in Saint Augustin parish in Jacmel; Joseph Webster was tonsured to serve in Saint Moïse le Noir parish in Fontamara; Jonas Lége, for the parish of the Holy Hierarch John of Shanghai & San Francisco (Paroisse Saint Jean de Shanghai et de San Francisco) in Les Cayes; and Jacobe Guy for Раrоіsse Saints Pierre et Paul in Léogâne. Also ordained subdeacon and deacon was Reader Hermann Abraham, to serve in Saint Jean de Shanghai parish.

Traditionally, the divine services in the mission are sung by all of the parishioners, but some hymns at the hierarchal services are performed by the readers, as well as by students singing under the direction of Matushka Rose Legouté. Over 200 of the faithful prayed at the triumphal Liturgy, with about 100 parishioners communing of Christ’s Holy Mysteries. Upon completion of the service, Metropolitan Hilarion laid and blessed the cornerstone for the upcoming construction of a new, stone church. A festal luncheon was prepared for the guests, during which the clergy and faithful had an opportunity to interact with their ruling bishop. The same day, a farewell supper was held with the participation of the VIM workers. On Monday, January 26, Metropolitan Hilarion and the accompanying clergy departed for New York City.

"At the present time, three priests and three deacons service the seven Haitian Mission parishes, but this is not enough to serve the spiritual needs of the mission’s faithful, who also happen to live at quite a distance from one another," explained Fr. Alexandre Antchoutine, upon returning from Haiti. "In some parishes, priests can only come to serve the Divine Liturgy and commune parishioners once a month. Faced with these circumstances, the divine services often must be lay services, conducted by the deacons or readers, who lead the prayer rule daily."

Metropolitan Hilarion is a strong advocate for developing the clerical ranks within the Russian Church Abroad, and uses every opportunity to provide the requisite knowledge to candidates for ordination. One of the deacons in the Haitian Mission is currently preparing to enroll in the Paris Seminary, with the expectation that he will be ordained to the priesthood.

Traditionally, all of the mission parishes have their own elementary schools. They cannot be called "parish" schools, because children receive a secular education therein, as well, which would otherwise be unobtainable for many of them.

"The mission’s clergy and volunteer parishioners look after children who lost their parents, or who were born or became disabled, and who do not receive the care that they need," continues Fr. Alexandre. "By the efforts of the mission’s Orthodox Christians, they are fed every day, are all neatly dressed in their school uniforms, and all of this lies on the shoulders of the mission, which itself is in need of funds. The clergy themselves live a lifestyle that can only be described as humbler than humble could be, and as such we cannot help but rejoice at the love with which the churches are erected and iconostases built, the piety of the parishioners, and the love that reigns in the community! The priests travel the country, and they not only nourish their own parishioners, but perform missionary and social work among the country’s non-Orthodox inhabitants, drawing people to Orthodoxy. They are in great need of Orthodox literature in French, and of funds that can be used on immediate daily needs. In addition to this, I would like to note the humility of both the Haitian clergy and laity: not once during our visit has anyone complained, no one has asked for money – all the people have done is give thanks." Knowing the Haitians’ natural humility, His Eminence decided to see for himself the needs of the Haitian faithful.

"The Haitians did their utmost to greet Metropolitan Hilarion cordially: children used markers to draw large greeting posters, and presented His Eminence with their drawings. Everything was done from the heart. Of course, there was a language barrier between the clergy accompanying the Metropolitan and the local priests – virtually no one in Haiti speaks English. Therefore, it was all the more endearing to them that Metropolitan Hilarion performed the divine services in French, spoke with the locals, and was even our interpreter during the trip. And we saw with our own eyes the work being done by the priests in these incredibly impoverished conditions, trying to help not only the Orthodox, but all of those in need."

Metropolitan Hilarion brought many presents for the children, as well as financial aid that was given out to help with the mission’s needs. With the help of his parishioners at the Church of the Mother of God "The Inexhaustible Chalice" in Brooklyn, Priest Paul Ivanov gathered an entire suitcase of gifts for the children of the mission.

"This is a place in dire need of financial aid," adds Fr. Alexandre. "Thanks to the help of the Fund for Assistance and other Christian organizations, the mission is being rejuvenated and is flourishing. The people are receiving spiritual nourishment, and the children – almost 700 Haitians – are receiving an education in the mission’s churches. These are people of great faith: they themselves can bring nothing of material value to the church but their prayers. They come to pray to the Lord, and use their abilities and talents to help to build and to teach the children. Thanks to God and to their humble, sincere, and fervent prayers, the mission is developing and growing." 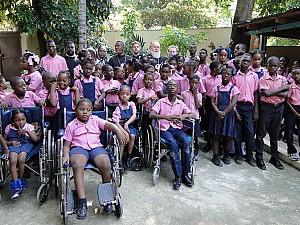