"Certainly the Saints will Intercede for Him:" Metropolitan Hilarion serves Funeral for Monk Joseph (Lambertsen) in Synodal Cathedral of the Sign 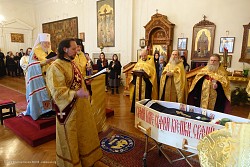 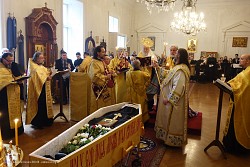 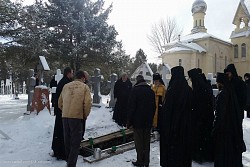 On Wednesday, February 1, the clergy and faithful of New York City gathered in the Synodal Cathedral of the Sign to bid farewell to Monk Joseph (Reader Isaac Lambertsen), who reposed on January 27, after a brief battle with cancer. Also in attendance were members of the Diocese’s English-speaking community, not only close friends of Fr. Joseph’s, but many who owe him a debt of love and gratitude for him tireless and voluminous work translating and composing the divine services.

Leading the funeral service was the First Hierarch of the Russian Church Abroad, His Eminence Hilarion, Metropolitan of Eastern America & New York. He was co-served by His Eminence Gabriel, Archbishop of Montreal & Canada, and clergy close to Fr. Joseph:

The entire funeral for a monastic was read and sung in English, all using Fr. Joseph’s translations. The choir sang beautifully under the direction of Matushka Eugenia Temidis, who had worked alongside Fr. Joseph for many years in the Synodal Cathedral and in the composition and arrangement of English-language church music.

In his eulogy, Metropolitan Hilarion said of Fr. Joseph (known to almost all before his repose as Brother Isaac:

We have gathered together here to bid farewell to our brother, the Servant of God Joseph. First of all, I wish to express sincere and heartfelt condolences to his family: his father, Edward, Sr., and to his close relatives, and to his friends, and to all of us – who knew him, who lived with him, who loved him as a zealous laborer in the Church, and as a friend. He was known as Edward, Jr. in his early years. When he discovered Orthodox Christianity and converted to the Orthodox Church, he took the name of Isaac in honor of Venerable Isaac the Syrian: a great theologian, missionary, and writer of the 7th century. And in the last several months, when his illnesses became very acute and he felt his earthly life here ending, he asked to be tonsured a monk, and he was given the name of Joseph in honor of another saint who was a great liturgical poet and hymnographer: one who wrote many hymns which are used in the Church to this very day: St. Joseph the Hymnographer, who lived in the 9th century.

After having converted to Orthodox Christianity, he went to study in Holy Trinity Seminary in Jordanville, NY, where he learned Church Slavonic and Russian. God endowed him with many gifts: his love for literature, particularly English literature, his knowledge of languages, as well as his knowledge and love of music. God gave him a beautiful voice, and having learned the rather intricate music of the Orthodox Church, in 1982 he was invited to come to this cathedral to be a reader and a singer, as well as to serve in the secretariat of our Synod of Bishops. He often had to translate documents and letters from Russian into English, compose things for the office, and God also inspired him to begin to translate the services of the Church into the local language (English), and he embarked on a tremendous journey of translating the monthly Menaion, a book that contains the services for the saint of each day, or several saints which are commemorated on the day every month of the year. This was twelve volumes of the monthly Menaion. And not only that.

He was granted the gift of hymnography , that is, having been inspired by the services written to the saints, he himself began to compose services for many saints that had never had a service, including saints of the West whom we honor as Orthodox saints and were not known to many of us previously. These services were often commissioned by various people in England or France. People would write to Br. Isaac and would request, and he would very readily agree to compose such a service. This is the great legacy which he was left for us in the Church, for the English-speaking Orthodox people. And not only for the English-speaking people, because many were translating the services into other languages, using the English translations of Monk Joseph as a starting point to compare the service with other languages, such as the original Greek, in order to find the right translation into other languages. So, this is something that God inspired him to do. He composed over 75 services on his own.

We are very grateful to God, and to him for granting us this great treasure, this spiritual legacy which we will always be using in the Church. God saw fit to permit various illnesses to come upon him. For many years, he suffered from diabetes: he found it difficult to do the things that he was assigned to do, but he did, with great fervor, overcome his pain. Especially in the last years, when other illnesses came upon him, he continued to sing and do the daily services in the church. Sometimes, often sitting, because he was no longer able to stand for a long period of time.

God grants us illnesses so that we can be purified, humbled, and able to come before the Judgment Throne of Christ with a pure soul. There is no person in the world who has not sinned; God alone is without sin. And that is why we in the Church pray for those who have reposed, because we express in this way our love. We love each other and do God’s commandments, and we also pray for one another, and the love which we have in this life continues into the future. We continue to love our ancestors, our parents, our relatives who have departed from us, and we continue to pray for them, asking God to forgive all their sins which they may have not repented of, not purified themselves of, so God would forgive all sins both voluntary and involuntary – forgotten sins. And that He will grant unto the monk Joseph His Heavenly Kingdom. We call them the mansions; which Christ has promised unto those who love Him. And so, I want to thank everyone for being here and for prayer for the newly-reposed, and let us continue to keep him in our hearts and minds, praying for his eternal rest. Amen.

Among those there to bid farewell to the prolific translator was Matushka Deborah Johnson:

I’ve been Orthodox for 31 years, and from the very beginning my heart burned to be able to understand the divine services in my own language. I begged God to either take that fire out of my heart or give me a Church where all the services were in English. The thing is, the services needed to be translated into English. And without Br. Joseph’s work, that wouldn’t have happened. Throughout the funeral, I was thinking, "Thank you, Isaac. Thank you, thank you, thank you! Thank you for giving your whole life as a burnt offering to Christ and the Church for all of our sakes!" I am so grateful, and so are all of the people who benefit from a full cycle of services in English; every time I get to go to church, I feel like it’s Christmas again when I was a child.

As a convert who grew up in a Russian parish, there wasn’t very much in English at all. There was nothing for Vigil. You could read the Liturgy in the Jordanville Prayer Book, but that was about it. Because of Br. Isaac, we had Vigil. And with Vigil and the Menaion came theology being sung by families all over America every week… Monk Joseph, Brother Isaac, was the bedrock of our canon of English service that we have now in ROCOR; he is the reason why we can do Vigil in both languages. Now we can have both Slavonic and English, and everybody gets to learn. And it’s not just the Americans who benefit from the English services, because Slavonic is not Russian, and many Russian speakers better understand the services with the benefit of an English translation. It’s very important for Russian speakers to hear the services in English, so that they can talk about God to their neighbors. All of us are called upon to bring the Good Word to others, but how can we do it if we don’t know the words? So, everyone in ROCOR can now have a theological vocabulary, and that is the legacy of Monk Joseph.

Fighting back tears, Matushka Joannikia Dean said of her acquaintance with Fr. Joseph:

I am a convert to the Orthodox Faith. While you are still outside of the Faith, you recognize that there is another world, and you try to enter that world, and the portal to that world is like the door of the church. You stand at that door and you feel God’s presence and you long to see the faces of the saints, and I don’t think I could have made it in Orthodoxy if it weren’t for Brother Isaac, because for me he opened the heavens. He showed me the saints, their personalities, and he introduced me to them. When I was young, I took a year off from what I was doing, and I spent every day that I could in church and I heard all of the services; they were in English, and all of that was Isaac’s work. At that point, I hadn’t met him yet face-to-face. Years later, we traveled to Serbia together, and he was always so patient. People would always remember that Americans were deaf and blind if you didn’t translate for us, and we never wanted to ask anybody because it was such a labor. But Isaac would always turn and see me in the back of some place, and explain just what had happened. And he did it unassumingly, he did it gently, he did it lovingly – he never made it feel as if this was a burden. And he always saw, always paid that kind of attention to see who needed that. And he was careful; I remember thinking, “Isn’t this an interesting man? This is a man who doesn’t just love the poetry of the saints, or just the Kingdom of Heaven, but he defends with his entire soul the Truth of the Faith...” He rendered what was there; I always felt Isaac was solid, and I could always trust his translations.

Isaac was a very unassuming man: he wasn’t a tall man or imposing man, he was just very gentle. And you kind of took him for granted; but when you stop and think of all the services, all the lives you’ve ever heard, all the times your heart leapt at the saint, Isaac made that possible. I don’t think I could have made it in Orthodoxy if it weren’t for that; I was thirsting for those stories and longing for that world… When he was told he had cancer, we knew he had only three months, and a couple days more, but he was able to prepare in a way that almost nobody gets to prepare. And that is a huge gift from God to be able to sum up your life in that final ode to God and to be able to talk to people to ask their forgiveness to find peace. It’s a huge gift, and in that I see the great love of Christ for all of us. May he find rest with the saints. Certainly they will intercede for him.

Following the final kiss, Fr. Joseph’s body was taken out of the cathedral and transported to Holy Trinity Monastery in Jordanville, NY, where on Thursday morning the burial rite was performed by the abbot, Archimandrite Luke (Murianka), in the presence of the brethren and faithful.

May our Lord Jesus Christ grant eternal rest to His servant, Monk Joseph! 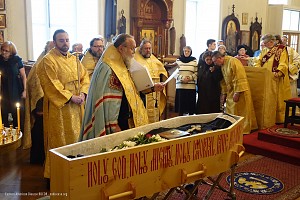