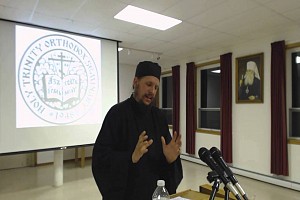 The Lenten Pastoral Retreat of the Eastern American Diocese, which will be held on March 20-22, 2017 at St. Alexander Nevsky Diocesan Cathedral in Howell, New Jersey, will feature a lecture by Archpriest Peter Heers on the "Great and Holy Council" of the Orthodox Church, which took place in Crete in June 2016.

Fr. Peter’s talk is sure to be of interest to all Orthodox Christians, especially to the Church’s pastors. It is imperative that Orthodox clergy be informed of the Council, the decisions which were reached, and also the subsequent developments in the various Local Churches, which portent significant pastoral implications for Orthodox unity.

Having written the book on the new ecclesiology of Vatican II, Fr. Peter Heers will also be able to answer questions with regard to the wider issue of how Orthodox theology and theologians are being affected by the ecclesiology offered by the Council.

Fr. Peter was born in Dallas, TX and grew up near San Francisco. The son of an Anglican priest, in 1992 his parents and much of his father’s parish converted to the Orthodox Church. In 1996, he came to Thessalonica, Greece, in order to visit Mt. Athos, returning again in 1998 to begin the Theological School of the University of Thessalonica.

Fr. Peter is presently the instructor of Old and New Testament at Holy Trinity Orthodox Seminary in Jordanville, NY. He has undergraduate, masters, and doctoral degrees in Dogmatic Theology from the Theological School of the University of Thessalonica. Fr. Peter is the founder and first editor of "Divine Ascent: A Journal of Orthodox Faith." He is the host of the online podcast "Postcards from Greece," found at Ancient Faith Radio, and a regular speaker to parish groups in the United States and Canada. Fr. Peter is also the author and translator of several books, including The Life of Elder Paisios, The Epistles of Elder Paisios, and The Truth of our Faith.