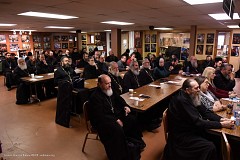 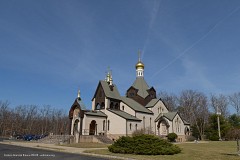 On Tuesday, March 21, the Lenten Retreat for clergy of the Eastern American Diocese continued at the Diocesan Center at St. Alexander Nevsky Cathedral in Howell, NJ. After a light breakfast, Retreat participants – which also included matushkas, as well as clergy from the Patriarchal Parishes in the USA – gathered in the cathedral to greet the First Hierarch of the Russian Church Abroad, Metropolitan Hilarion of Eastern America & New York, and two wonderworking icons of the Mother of God: the Kursk Root Icon, and the myrrh-streaming Icon "Softener of Evil Hearts." The presence of the latter at lenten retreats has become a tradition and a great comfort for all those who gather for brotherly interaction and prayerful repentance.

A Moleben before the Beginning of Any Good Work was served before the Life-Giving Cross of the Lord and the two wonderworking icons. Joining His Eminence were Metropolitan Jonah (Paffhausen; former Primate of the Orthodox Church in America), Bishop Nicholas of Manhattan (vicar of the Eastern American Diocese) and Bishop Irenei of Sacramento (vicar of the Western American Diocese).

"‘Behold, how good and how pleasant it is for brothers to dwell together in unity!’ We are greatly blessed to be together here today, united in the presence of the Holy Cross of our Savior, the emblem of our salvation. We are also blessed by the presence of two wonder-working icons: the ancient Kursk Icon of the Mother of God, and the myrrh-streaming Icon ‘Softener of Evil Hearts,’ two icons that send us many blessings and healings.

"It is significant that today is one of the feasts of the Kursk Root Icon of the Mother of God. Before the Revolution, there were many attempts to destroy the wonderworking Icon, because even then, there were many anti-Christian, anti-religious terrorist acts. One of these was in 1898, when a group of men tried to destroy the wonderworking icon, and undermine the people’s faith. One night, the monks of the monastery, where the Icon was kept, heard the dreadful sound of an explosion in the main cathedral. They discovered the destruction of many church objects and the analogion, but the Icon was safe.

"Thanks to this miraculous intervention, which we commemorate today, the Icon remains safe. After the Revolution, it was taken to Yugoslavia, then to Germany, and finally to the United States. In 2009, it returned to Russia for the first time since the Revolution, joining the annual procession from Kursk’s central cathedral to the Kursk Root Hermitage. And now the Mother of God is here with us today.

"We have come here to confess our sins, to prepare ourselves for the pastoral work that we continually perform in our parishes.  With God’s help, we will also hear lectures and have discussions regarding these practical pastoral matters. We pray that God might bless this gathering, this Retreat, and help us in our spiritual life to have endurance and patience, and to acquire that pastoral love, which is so greatly required by those who tend to the souls of men. May God bless us all!"

In turn, diocesan secretary Archpriest Serge Lukianov greeted the First Hierarch of the Russian Church Abroad and the Diocese’s ruling bishop, expressing the shared joy at Metropolitan Hilarion’s recent (on the eve of the Retreat) return from the Diocese of Great Britain, where His Eminence, also as ruling bishop, had spent time rejuvenating the Diocese and visiting parishes and monasteries with the Kursk Root Icon.

Conference participants then proceeded to Nevsky’s Café for their first lecture, by Bishop Irenei, on the subject of the Great Canon of St. Andrew of Crete. Audio of His Grace’s lecture is available here.

Following the talk and a question and answer session, luncheon was served for the participants of the Pastoral Retreat by the cathedral sisterhood and volunteers.

After lunch, Retreat Participants listened to a talk by Archpriest Peter Heers on the 2016 Council of Crete.

That evening, the Akathist to the Most Holy Theotokos was read before the two wonderworking icons, followed by the reading of the Prayer Rule for Holy Communion. Following a lenten dinner, the clergy once more gathered in the cathedral, where Matins was served for the feast of the Forty Martyrs of Sebaste. Everyone was able to confess their sins, in order to commune the following day at the Liturgy of the Presanctified Gifts. 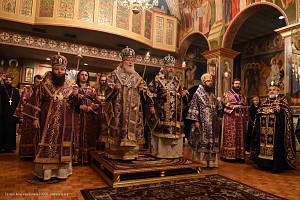