The below article by Ludmila Keller was published in 1987 in "Orthodox Russia" Issue #15, in anticipation of the Millennium of the Baptism of Rus’, the main celebrations of which the Russian Church Abroad held at St. Vladimir Memorial Church in Jackson, NJ. As part of the Media Office’s ongoing efforts to highlight the history of our Diocese and the legacy of our luminary hierarchs, this article has been translated to English and is being published in anticipation of the St. Vladimir’s Day Celebrations. 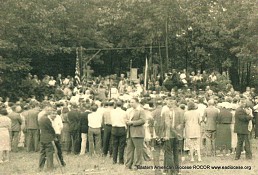 On the eve of the celebrations of the 1000th anniversary of the Baptism of Rus’, it behooves us to be reminded of our Memorial Church, commemorating this event. First, a short “historical” note.

The idea to found the church in commemoration of the Baptism of Rus’ was devised by Archbishop Vitaly (Maximenko). With the goal of realizing this idea, Archbishop Vitaly founded the St. Vladimir Society. Archbishop Vitaly received a parcel of land as a gift, an acre in size, in the town of Jackson (formerly Cassville), in the state of New Jersey. Later, this place, receiving wide ascendency, received the name “St. Vladimir’s Mount” from the people. 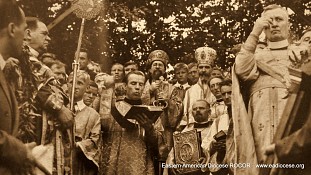 The Memorial Church project belongs to the renowned architect R.N. Verkhovskoy. The cornerstone was laid in 1940 by Metropolitan Theophilus, Archbishop Vitaly, and Bishop Macarius (it should be noted here that in 1940 the Church in America was still united, and only later did it split into the Russian Orthodox Church Abroad, headed at that time by Vladyka Vitaly, the American Church headed by Metropolitan Theophilus, and the Church in submission to the Moscow Patriarchate, headed by Bishop Macarius, having been elevated to the rank of Metropolitan).

Soon after laying of the church’s cornerstone, these United States became engaged in the war and construction came to a halt. In 1948, Vladyka Vitaly conferred the construction unto Hieromonk Anthony (Medvedev), currently Archbishop of San Francisco. It inaugurated the erection of the lower church, and in that church divine services commenced. In 1957, Archpriest Fr. Vasily Musin-Pushkin was appointed rector of the Memorial Church, and he energetically took to the erection of the church building. The walls and apses of the church were raised under the supervision of the architect W.G. Glinin.

In the meantime, the construction continued its course, and in 1965 the walls were finally raised, the cupola built, and interiors of the church plastered, in which divine services now began before the temporary iconostasis.

The church was built by the voluntary donations of the Russian people; the names of the donors, the living as well as the dead, are inscribed upon the walls of the lower church and commemorated during the daily divine services.

After the repose of Archbishop Vitaly (in 1960), he was succeeded by Vladyka Nikon (Rklitsky – ed.). Archbishop Vitaly willed that he be buried in the lower church; his successor would, in time, also be laid to rest there. In 1985, on the occasion of the 25th anniversary of the repose of Vladyka Vitaly, Metropolitan Philaret wrote: “Archbishop Vitaly of blessed memory entered into the history of the Russian Church with his ascetical, evangelistic feats in the Pochaev print-shop, then in Carpatho-Russia, and, at last, in North America, where, aside the aforementioned, he left an eternal memory of himself in the shape of Holy Trinity Monastery and St. Vladimir Memorial Church.”

Interestingly enough, Archbishop Nikon originally had the inclination to be buried in Holy Trinity Monastery in Jordanville (see the spiritual testament from April 6/29, 1975), basing his desire on the thought that it was “a holy habitation, to which I am always bound with my spirit, although I have spent little time there, as my work ensued outside the monastery.” In time, however, Archbishop Nikon made the following change in his original testament, directing now the following: “I ask to have my body buried in St. Vladimir Memorial Church, in the lower floor, at the feet of Archbishop Vitaly’s crypt.”

Since 1973 the rector of the church became Archbishop Nikon, and his deputy was Fr. Konstantin Federoff. At the present time, the rector of the Memorial Church is Fr. Boris Kizenko. (At the time of the article’s publication. Archpriest Boris Kizenko reposed in 2010. The current rector is Metropolitan Hilarion, whose deputy rector is Priest Serge Ledkovsky – ed.). 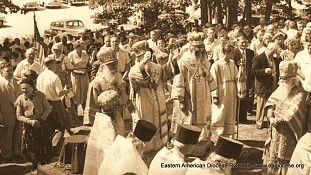 Annually since 1950, the so-called “St. Vladimir Days” take place, which have now become a yearly tradition. The St. Olga Sisterhood works within the church and publishes the St. Vladimir Calendar…

As indicated by Vladyka Nikon, the idea of creating St. Vladimir Memorial Church “emerged during the celebration of the 950th anniversary of the Baptism of Rus’ in 1938 (see “Church Life” for May-June, 1973, pg. 69). Since that time, 50 years has passed and now Vladyka Vitaly’s idea is finally coming to life. Fr. Michael Pomazansky, in turn, points to the “historical roots” of the St. Vladimir Idea; the roots have a dual nature: religious and ethnic. Of the religious heritage, Fr. Michael Pomazansky writes thus: “In the religious aspect, the people must know that Christian illumination in the pure form of Orthodoxy reached them at the very dawn of their statehood… The second side of this idea is the ethnic. From the beginning of the statehood of our people. our national identity was established. The creation of the religio-national memorial of this kind in America will serve the exact same goal: the idea of retaining the religious unity of the Russian people.” (Archpriest Michael Pomazansky, “On Life, on Faith, on the Church,” 1976, pp. 256, 271).

At the laying of the foundation stone of St. Vladimir Memorial Church, Vladyka Vitaly invited all of the participants of the celebration to “search deeper and understand the importance of the forthcoming moment.” He further reminded them, “how 180 million of our Russian people gathered in 1862 from all ends of their boundless country in ancient Novgorod to unveil the memorial to the 1000th anniversary of Russian statehood. Let us likewise remember how later in 1888 they gathered in the [ancient – trans.] capital city of Kiev for the consecration of a memorial church to their enlightener, the Great Prince Vladimir, for the 900th anniversary jubilee of his baptism of our people” (“Orthodox Life,” August 1973). 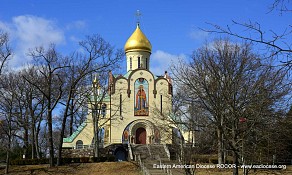 If all of these jubilees mentioned (and the celebration of the 950th anniversary of the Baptism of Rus’, already in America) gave Vladyka Vitaly the idea to found the Memorial Church, then with the approaching of the millennial anniversary of the Baptism, we must all worthily strive toward finishing the construction of the Memorial Church. One last push remains, and the church will shine alongside the greatest buildings of the Diaspora. Beside the all-diasporan and all-national significance of the Memorial Church, with it we also honor the memory of two of our reposed hierarchs: Archbishop Vitaly and Archbishop Nikon, and their colleagues. If Vladyka Vitaly thought of the St. Vladimir Memorial Church as “a memorial to the former Holy Russia and a standard raised in the hopes of her resurrection, then does it not appear in our time as a symbol of the commencing renaissance in our homeland?