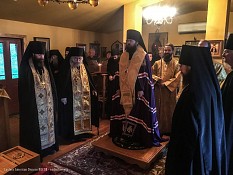 On Tuesday the 8th and Wednesday the 9th of August, the feast of the Holy Great-Martyr & Healer Panteleimon, the brethren of Holy Cross Monastery in Wayne, WV celebrated the memory of their Heavenly patron. Leading the divine services this year was His Grace Irenei, Bishop of Sacramento, vicar of the Western American Diocese.

His Grace’s visit was not without incident: although a greeting was planned for his arrival on Monday night, it was postponed as the hierarch’s plane was struck by lightning midflight and forced to land in Roanoke, VA before finally arriving late in the night. The official greeting was thus held during lunch on Tuesday, immediately after which Bishop Irenei led a moleben with the blessing of the synaxarion (community meeting room) in the recently constructed St. Herman Building.

Speaking to the brethren after the moleben, His Grace said, "I pray that the blessing of this new synaxarion will be fruitful for your brotherhood to be able to come together as a family, to speak together, to hear each other, to converse on every useful subject that will lead to eternal life, using this space as has long been dreamt."

That evening, after various obediences, supper, and a short rest, the All-Night Vigil for St. Panteleimon was served in the monastery church. Co-serving His Grace at Vigil were:

Praying in church was Deacon Andrew Temple (cleric of Christ the Savior Church).

During the Polyeleos, the magnification was sung to St. Panteleimon, followed by an akathist, sung by all of the clergy and faithful. The akathist booklet is a publication by Holy Cross Monastery, and represents countless hours of hard work by its compilers and editors. Many of the faithful made their confessions, in order to approach the Holy Chalice the following morning.

Upon completion of the service, Bishop Irenei tonsured two novices, Readers Justin (Blevins) and David (Perkins), to the rassophore. The latter received the name Symeon, in honor of Venerable Symeon the New Theologian. Although the usual practice is to bestow a new name on a monk during tonsure to the Lesser Schema, there is already a Monk David at the monastery, and thus a new name was bestowed to prevent confusion. Noting that "today is a day when the angels rejoice," His Grace wished the new monks God’s blessings in their struggles and the intercessions of their patron saints, and charged the remaining brethren to keep their brothers in their prayers.

After Vigil, a bountiful Mediterranean meal was served in the monastery refectory, prepared and provided (as it is every year) by the Saad family, local faithful and longtime patrons of the monastery. 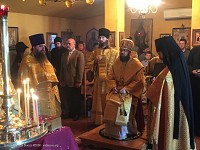 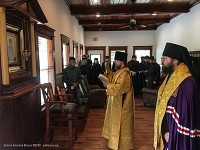 The following morning, the clergy and faithful then greeted Bishop Irenei, and the hours were read. Concelebrating the Divine Liturgy was the above-mentioned clergy, joined by Archpriest James Dougherty (cleric of Christ the Savior Church), and Priest Mark Tyson (rector of Holy Dormition (St. Mary’s) Carpatho-Russian Church in Bluefield, WV).

Just before the faithful received Holy Communion, Bishop Irenei addressed the gathered worshippers with a sermon, saying, "I hope, not only for the members of this community, but for all Orthodox Christians, that the life of the Holy Great-Martyr & Healer Panteleimon is not foreign. And if it is, I plead with you to read his life, to learn from his example, to discover in him and in his history a testimony to the power of Christ to transform human life and even sickness into something sacred. We have in the example of St. Panteleimon an extraordinary witness of what it means to follow Christ.

"Often when we read the Lives of the Saints, a certainly despondency comes upon us, because their lives seem so foreign to us. And St. Panteleimon’s life is certainly foreign: he lived in a time completely alien to us, when Christianity was still new; few people had heard of it, and those who did often despised it. It was a world where being a Christian meant you could be persecuted, even unto death, where confessing Christ could cost you a great deal. Even if you were not martyred, being a Christian often meant social ostracism and mockery. We see in this young man the ability to work miracles, to raise a young man from the dead, to do as Adam had done and speak to serpents. He studied medicine and learned to perform healings, but more importantly he learned the divine arts and performed spiritual healing, never forsaking one for the other, and sharing until the end of his days the gift that the Lord had given to him to heal.

"St. Panteleimon’s original name was Pantaleon, meaning ‘a lion in all things.’ He was named for fierceness. But his fierceness was bridled with deep inner peace; he was renamed Panteleimon, ‘all-merciful one.’ But it was said by those who knew him that he never abandoned either of those names throughout his life, Panteleimon and Pantaleon – all-merciful and always a lion. A lion knows when it has to be fierce, when it has to stand up and work and help; St. Panteleimon knew when he had to call his education and his arts and his wisdom to usefulness for the sake of others. But the wise lion, the spiritual lion, also knows when it is in the presence of his Maker, and knows to lie down peacefully and do the bidding of its Creator."

Upon completion of the service, a short moleben was served to the Holy Great-Martyr & Healer. His Grace congratulated the faithful with the feast, and thanked Fr. Seraphim for his hospitality and the joy of their shared prayer. In turn, Fr. Seraphim thanked Bishop Irenei for his archpastoral visit and edifying words of instruction.

The deacons intoned the Polychronia for the monastic brotherhood and the faithful, as well as for the namesday celebrants. After Liturgy, all of the brethren processed in order to the monastery refectory, carrying a special prosphora from the church for the Rite of the Panagia. After the luncheon, the Rite was completed, during which all those present sang hymns to the Most Holy Theotokos as the prosphora was cut up and then taken around the refectory. The faithful each took a piece of the blessed bread, made a sign of the cross over the censer, and ate it. 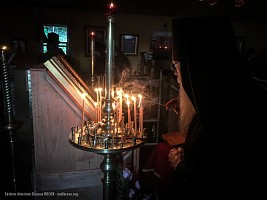