On August 21, 1987, longtime cell attendant to Metropolitan Philaret (Voznesensky) of Eastern America & New York, Protodeacon Nikita Chakirov, reposed in the Lord. In honor of the 30th anniversary of the repose of this zealous laborer of the Eastern American Diocese, we offer our readers an article written in memory of Fr. Nikita by Matushka Irina Lukianov (Boston, MA). The article was originally published in "Orthodox Russia" journal №21 (1987) and has been translated from Russian: 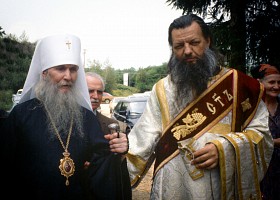 Protodeacon Nikita Chakirov – a longtime attendant, if such an expression is permitted, of the late Vladyka Metropolitan Philaret, recently passed away. Vladyka Laurus blessed me to write a few words about Fr. Nikita, as I worked alongside him in the Russian Youth Committee – of which he was the initiator, founder, and chief laborer. This article is a humble epitaph for him.

I came to be closely acquainted with Fr. Nikita in 1971, when he organized the first youth pilgrimage to the Holy Land and asked me to be the assistant to Fr. Alexander Mileant (future Bishop of Buenos Aires & South America – ed.), the spiritual guide for three of the five pilgrimages. The mission of the pilgrimages was to acquaint the Russian youth with the holy places, dear to the Russian heart from days of old, strengthen their faith and understanding, and help them stay Orthodox and Russian while living in America. The worldly aspect was also not forgotten: the pilgrimage to the holy places brings the youth together, establishes a friendship between them for many years, and helps to create an Orthodox family – the domestic church.

Firstly, Fr. Nikita obtained a blessing from Metropolitan Philaret; his collaborators were but a small bunch. The extraordinary energy of Fr. Nikita amazed everyone. Somehow he recollected that he slept only a few hours a day. There were many stumbling blocks while the first pilgrimage came to be. There were five pilgrimages in all, and 185 members of the youth participated altogether.

It is necessary to mention here the publishing work of Fr. Nikita. By that time, a whole range of valuable books and albums were published by him, in Russian and English: “The Holy Land,” “The Holy Mountain Athos,” “The 50th Anniversary of the Russian Church Abroad,” the album “The Royal Coronation in Russia,” “The History of the Russian Realm,” “Monasteries and Churches of Holy Russia,” “Christian Philosophy and the Path to God” by the holy Righteous Fr. John of Kronstadt, “The Prayer Rule for Communion,” “The Prayer Book,” “The Manual for Preparation of Holy Confession and Communion,” “The Law of God,” “The Holy Gospel,” as well as annual calendars. Many of you were likely more than once became recipients of one of these, and complained once again: “Ah, Fr. Nikita is sending something again and we have to send money.” Thanks to the proceeds from these publications, it was possible to carry out the youth pilgrimages to the Holy Land. The youth paid only one-third of the expenses for the trip, the Committee paying two-thirds, and the proceeds came practically from the books and albums. So, for the first pilgrimage, everyone paid only $350.00 and $450.00 for the second. This included airfare, tickets for the train and steamboat, and food, and lodging for the five and a half weeks! With rare exception, in all places of our pilgrimages, by request of Fr. Nikita, someone would meet us, set us up in youth hostels, and help situate us. All tickets for the train, boat, prearranged lodgings for the night – it was all set up earlier by Fr. Nikita and his collaborators back in America. Some were allowed to travel completely for free, in the hope that they would mark some of their time to work in the committee packing and sending out books. Unfortunately, these hopes didn’t always come to fruition, and many times I came to hear how, yet again, Fr. Nikita is making us work. 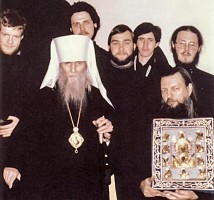 I would like to briefly tell of the pilgrimages themselves.

The youth would gather in New York from various cities of America in the Synodal cathedral, a traveling moleben would be served, and then all would head for the airport. The course of the pilgrimage was approximately one and the same. We would touch down in Stuttgart, where we would visit the Russian cathedral, built before the Revolution, afterwards we would drive to Munich. There, on the outskirts of town, was a piece of Russia, the Monastery of St. Job of Pochaev. Then we rode by train through the extraordinarily beautiful places of Bavaria, Austria, and Northern Italy to Bari to veneration the Holy Hierarch Nicholas.

None of the pilgrims will ever forget the Liturgy and akathist upon the tomb of the Holy Hierarch Nicholas, nor the feelings that were experienced there. I’ll reminiscence quickly how, during the second pilgrimage, Fr. Nikita joined us for a brief time and was with us in Bari. This was the time of short skirts and, even though the pilgrims had been sent instructions earlier on which clothing to bring, the chaperones often had to make [corrective – trans.] remarks, and in many instances these remarks were ignored. But Fr. Nikita came, looked sternly at the girls in short skirts, and instructed them to get longer ones, and they listened. This is just a brief digression.

Further, our path lay by steamship to Greece. The majority of us were finding ourselves in an Orthodox country for the first time. The joy of the ability to, at any time of day, enter a church, light a candle, and pray before many miraculous icons, was shared by all. Fr. Alexander headed with the boys to Athos, where they walked from monastery to monastery, and the girls and I had the chance to go venerate the [Holy Hierarch] Nektarios of Pentapolis on the island of Ægina, near Athens, and also into the mountain village of Prokopi, where the relics of St. John the Russian rest. The last leg of the pilgrimage, the most remarkable, was the Holy Land. We would stay there between 10 and 14 days. We usually lived in the school for Arab girls at our monastery in Bethany. Every day there was a bus at our service. The pilgrims would, as the first course of business, visit the Tomb (Sepulcher) of the Savior and Golgotha, afterwards to Bethlehem, to Nazareth, to the Jordan, to the Mount of Beatitudes, to the Lake of Gennesaret, at the Oak of Mamre in Hebron, onto Mount Tabor, and many other places. 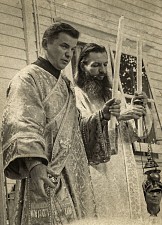 Entering a church dedicated to whichever event from the life of the Lord Jesus Christ, Fr. Alexander would read the Gospel relating to the given event, and all of the pilgrims would sing the troparion, kontakion, and stichera of the day. A small book, in which all was printed in order, as well as a guide to the holy places, once again, were published by Fr. Nikita.

The midnight liturgies at the Lord’s Tomb and on Golgotha, where all of the pilgrims would commune, were unforgettable. The Greek clergy served, almost all of the youth sang, commemorations sent from all corners of the Diaspora, of which we had an entire suitcase-full, were read at proskomedia. All who helped Fr. Nikita organize the pilgrimages sent him prayer slips with the names of relatives and friends, so they would be commemorated at the holy places.

For the five and a half weeks of life together, much was experienced: both joys and sorrows, but they brought the youth together and many became friends. There we also troubles on the road, when trains would be late and we sat for overnight in the station. The passport check in Brindisi before boarding the ship in the hot, humid night was immediately reminiscent of lines in the Soviet Union, where one not only had to worry about one’s wallet, but that one wasn’t trampled. The modest lodgings in the youth hostels without hot water and with lentil soup for lunch seemed the height of life’s troubles. But this also had benefit. More than once I heard from the pilgrims: “Now we understand our parents, who told us of the difficulties of evacuation during the war.”

From the midst of those pilgrims came an entire host of priests, deacons, choir directors, and matushkas in our Church Abroad. I believe that the pilgrimages in no small part facilitated this: strengthening their faith and helping them step on the difficult path of service to the Church.

I would like to address the other side of Fr. Nikita’s activity, known to few because he did it in secret, never calling attention to it. I am privy to many situations where he helped people that found themselves in need, very sick or having fallen into dire circumstances, without any request by the latter.

Throughout all the years of my collaboration with Fr. Nikita, I saw only his kind desire to serve for the good of the Church. He had an extraordinary energy and capacity for work, which sometimes weighed upon others, as he tried to draw them in and make them work as he did himself.

I saw also his sincere deep faith and knew that, in times of trouble, I could tell him my sorrows and ask for his prayers.

Fr. Nikita began getting sick long ago, but it seemed that he, always so energetic, would soldier through this, too. The Lord willed otherwise. A week before his death, Fr. Roman [Lukianov – trans.] spoke with Fr. Nikita on the telephone. They were no longer treating him, but only giving him pain medication. But even then, he was worried about someone else who had sorrows, and sought counsel in what to do. And he also asked for prayers, so that the Lord would accept him and be merciful to him.

I hope that the pilgrims and many others who knew Father Nikita will fulfill this, his last request.