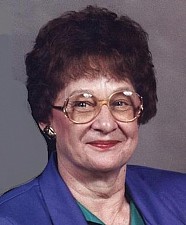 On Sunday, October 15, Matushka Martha Ermakov, of McKeesport, PA, reposed in the Lord. She was 88. She was born August 23, 1929 in Olyphant, PA (near Scranton) and was the daughter of the late John and Martha Russen Sweda. She was the wife of the late Archpriest Dimitri H. Ermakov.

Having lived her entire single life in Olyphant, PA, she became a switchboard operator for the former Bell of Pennsylvania, after graduating from high school. She met her future husband while he was attending St. Tikhon Seminary in South Canaan, PA. They were united in Holy Matrimony in July 1950. Her husband was ordained to the priesthood in June 1957. She served as a devoted wife, mother, and matushka.

After serving parishes in Carnegie, PA, Canonsburg, PA, and Buffalo, NY, Fr. Dimitri and Matushka Martha moved to McKeesport, PA in July of 1970, where they would remain for the rest of their lives. As a matushka, Martha was active in the parish choir and Balalaika group. She was an avid baker and cook, which included making the prosphora for the church. She continued to bake the prosphora late into her life. Her talents were many and she will be greatly missed by all who knew her.

Matushka Martha was laid to rest on October 18, 2017 from the Dormition of the Blessed Virgin Mary Russian Orthodox Church in McKeesport, PA. The burial service was performed by her son-in-law, Mitred Archpriest Stephan P. Romanchak and her son, Archpriest Dimitri D. Ermakov

Memory eternal to the newly reposed handmaid of God Martha!