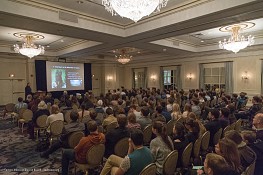 On Saturday morning, December 23, the annual St. Herman Youth Conference opened in Holy Dormition Convent "Novo-Diveevo" in Nanuet, NY. This year, 160 young men and women are taking part in the conference, traveling from around the Eastern American Diocese, Canada, Russia, and Australia. Arriving youth were greeted by Archbishop Gabriel of Montreal & Canada.

The St. Herman Conferences began in 1973 when, three years after the glorification of Venerable Herman of Alaska by the Russian Church Abroad, the first youth forum was held with the blessing of Bishop Laurus of Syracuse & Holy Trinity. At first, these youth gatherings were not conferences, but rather pilgrimages to Jordanville, NY – to Holy Trinity Monastery. Their first organizers were Hieromonk Ioanniky and Archpriest (then seminarian) Gregory Naumenko. In the late 1970s-early 1980s, the pilgrimages were also held in the holy places along the East and West Coasts. In the mid-1980s, with the blessing of the hierarchy, various parishes of the Church Abroad began hosting the conferences. In 1975, the first parish after Jordanville to welcome the delegates of St. Herman Conference was Holy Virgin Protection Church in Nyack, NY. Taking part in the work of the conference was Metropolitan Philaret (Voznesensky; +1985). They were succeeded by parishes in New Jersey, Pennsylvania, Ohio,   New York,   Maryland, California, the District of Columbia, and Ottawa, Canada.

St. Herman Youth Conferences are now held yearly, at the end of December, and are geared toward the feast of Venerable Herman of Alaska. Taking part are youth aged 15-25.

Four decades after the first St. Herman youth pilgrimages, the conferences serve, as before, as a fertile ground for church instruction, education, and interaction between Russian youth. Every year, new forms of educational and missionary work are introduced to the conferences’ program.

Conference participants began to gather at the convent on Friday evening, December 22, and had an opportunity to talk with one another as they cleared the snow. 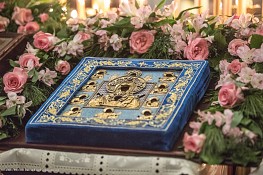 The following day, addressing the youth, Archbishop Gabriel noted the importance of the conference as a place where young people can gather yearly and interact on subjects that interest them. His Eminence once again drew the attention of the conference participants to the significant events in the history of the Church being commemorated this year: the decennial of the reunification of the two branches of the Russian Orthodox Church – in the homeland and abroad – and the centennial of the restoration of the Patriarchate in Russia.

Convent cleric Protodeacon Serge Arlievsky delivered a lecture on the ramifications of the October Revolution of 1917 on the United States. Fr. Serge spoke about the history of several revered icons, which after the revolution found their way from America to "Novo-Diveevo" Convent, as well as about the lives of the convent’s founder, Archbishop Andrei (Rymarenko), and the founder of Holy Protection Church in Nyack, Archpriest Seraphim Slobodskoy.

That same day, the youth took part in workshops, discussing such subjects as Orthodox relationships, mass media and Orthodoxy, fasting and salvation, and preparation for the professional life. Everyone then departed from the hotel for "Novo-Diveevo," where the Prayer Rule before Holy Communion was read before the start of All-Night Vigil. 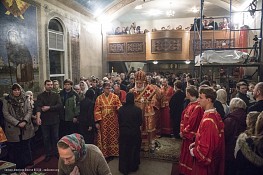 Over 300 people gathered for the evening service. Prior to the start of Vigil, everyone venerated the holy icons and relics of Holy Dormition Convent.

The service was held under the aegis of the Protectress of the Russian Diaspora – the wonderworking Kursk Root Icon of the Mother of God.

Upon completion of the service, all were invited to dinner in the hall of "Otrada" Society. On Sunday, December 24, the eve of the feast day of Ven. Herman of Alaska, Archbishop Gabriel celebrated Divine Liturgy in St. Seraphim Cathedral. His Eminence was co-served by the same clergy as at Vigil, as well as by Deacon Anton Kouznetsov, cleric of Joy of All Who Sorrow Church, who had traveled up from Atlanta, GA. Liturgy was sung by a youth choir 60 voices strong.

Praying at Liturgy, in addition to conference participants, were the convent sisterhood, parishioners, and guests from neighboring parishes. The faithful communed from three chalices.

Upon completion of the service, a group photo was taken of the clergy and conference participants, after which they gathered for a tour of the local Palisades Mall. That evening, Holy Protection parish in Nyack invited all to dinner. 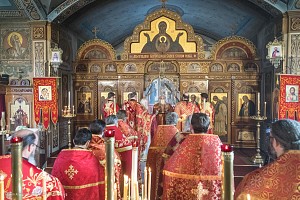