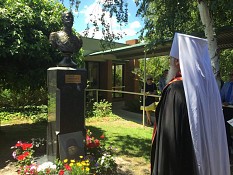 The past 2017 year marked the centennial of the terrible revolutionary events that led to the mass exodus of the Russian people from the territory of the former Russian Empire and their resettlement around the globe. To this day, as a result of the sorrowful events of 100 years past, the Orthodox Russian people are perhaps the most scattered in the world.

In honor of the anniversary of this event, the Russian Orthodox Church Outside of Russia and the Foundation for Mutual Development & Strengthening of Spiritual Unity and the Religious & Historical Values of Russian Orthodoxy in the Homeland & Abroad "Under the Protection of the Theotokos" undertook a great mission: traveling around the world with the "Circumglobal" Icon of the Protection of the Most Holy Theotokos.

The goal of these worldwide travels was to unite Orthodox Russian living around the world, under the Protection of the Theotokos. For the first time, Russians worldwide were given an opportunity to "embrace" their brothers and sisters in Christ located on various continents, through the venerated "Circumglobal" Icon of the Protection of the Mother of God.

The journey began in Moscow on September 2, 2017, continued through Crimea, the Orthodox island of Cyprus, and the Holy Land: Bethlehem and Jerusalem, and the U.S. After visiting Australia and Hong Kong, the icon will return to Russia on the eve of the Nativity of Christ. During its travels, the "Circumglobal" Icon of the Theotokos will be placed on the most revered holy sites. At the end of December 2017, the icon arrived in Melbourne, Australia – on December 26 – the dedication of a monument to the Holy Tsar-Martyr Nicholas took place. The bust of Nicholas II was presented to the Russian Orthodox Church Outside of Russia by the "Under the Protection of the Theotokos" Foundation, and the monument installed on St. John of Kronstadt Square in Dandenong (Melbourne, Victoria).

The rite of the blessing of the monument to the Holy Tsar-Martyr Nicholas ended with a festal luncheon, held at St. John of Kronstadt Retirement Home, to which all those present were invited. 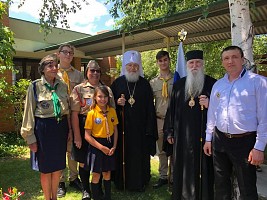