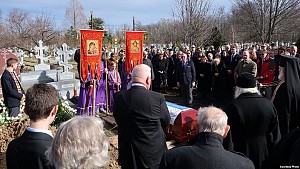 On Monday, February 26, a multitude of the faithful gathered at the Synodal Cathedral of the Sign in New York City to bid farewell to Prince Vladimir Kirillovich Galitzine, the cathedral’s warden for over 40 years. The funeral service was led by the First Hierarch of the Russian Church Abroad, Metropolitan Hilarion of Eastern America & New York.

Also praying in church were Archpriest Edward Chervinsky (cathedral cleric), Priest Serge Ledkovsky (deputy rector of St. Vladimir Memorial Church in Jackson, NJ), and Protodeacon Vadim Gan (cathedral cleric). The service was held under the aegis of the Protectress of the Russian Diaspora – the Kursk Root Icon of the Mother of God.

As an active member of the Russian Diaspora, Prince Galitzine was well known, and the cathedral was filled beyond capacity with those who came to pay their respects. Many of those present knew Vladimir Kirillovich through St. George Pathfinders of America, where his wife – Tatiana – children, and grandchildren are active members. Praying in the cathedral was Natalia Konon, Head Scoutmaster of SGPA.

The eulogy was delivered by Archbishop Peter, who spoke about the dedication of both Vladimir Kirillovich and his spouse to the Holy Church, and his service to the Russian people, continuing a tradition familiar to his noble ancestry. His Eminence also noted that Vladimir and Tatiana had shown a true example of Christian piety and fortitude to those around them – including their children and grandchildren – when in 2007 they had to unexpectedly bury their eldest son, Kirill. Archbishop Peter thanked all those who came to pay their respects, and charged them all to pray for the repose of the newly departed servant of God.

The burial then followed at the cemetery of Holy Dormition Convent "Novo-Diveevo" in Nanuet, NY, performed by Archbishop Gabriel. A memorial repast was offered at Holy Protection Church in Nyack. 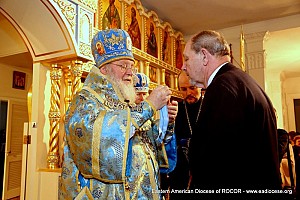 On February 22, at 76 years of age, Prince Vladimir Kirillovich Galitzine, President of the Russian Nobility Association in America and longtime warden of the Synodal Cathedral of the Sign in New York City, reposed in the Lord. The first panihida for the newly departed was served in the Synodal Cathedral by the First Hierarch of the Russian Church Abroad, Metropolitan Hilarion of Eastern America & New York

The princely family of Galitzines is one of the oldest noble families of Russia and has existed for almost 600 years. Representatives of this lineage were government ministers, ambassadors, governors, leaders of the nobility, scientists, musicians, writers, and artists. The October Revolution scattered them across various countries and continents, but wherever they lived, the Galitzines continued to serve the Motherland and the Church, God and the people.

After drifting in the American Zone of Occupation, the Galitzine family lived in camps in Germany for several years. In 1951, they emigrated to New York and ultimately settled in Brooklyn. Despite living meagerly, Vladimir’s mother still arranged for a tuition-free, quality education. Every year, he completed exams to ensure he received a scholarship.

After completing higher education, Vladimir Kirillovich worked in the International Department of the Bank of New York. During the 1990s, he led the Eastern European Department and actively worked in Romania, Hungary, Bulgaria, Poland, and East Germany. "Soon we started working with Russia and the former republics of the Soviet Union. In Ashkhabad, Alma-Ata, Yerevan, Tbilisi, and other capitals of the CIS countries, we helped banks to enter the international market," Prince Galitzine recalled. "Often, people could not understand why I liked to travel to such remote places where, it sometimes, there was not even fuel to refuel the plane and fly away in time. But it was an interesting, fruitful time – a time of historic change."

During one of his visits to Moscow, Prince Galitzine stayed at the Hotel "Baltschug," and saw how the Cathedral of Christ the Savior was being erected: "People worked even at night, and in a day the cathedral grew a few more meters. The impression is difficult to convey in words. Even then, colossal changes were visible in church life. We usually went to Vigil and Liturgy in one of the small churches in the center of Moscow. And not only elderly women prayed there, but also young people, and even quite a few men."

As one of the eminent figures of the Russian émigré community, Vladimir Galitzine was the warden of the main cathedral of the Russian Diaspora – the Synodal Cathedral of the Sign in New York City, home of the Protectress of Russian Diaspora – the wonderworking Kursk Root Icon of the Mother of God – for about 40 years. At 18, Vladimir, together with the clergy of the future cathedral, was engaged in its reconstruction: he carried out electrical work and made hangers for the hierarchal vestments. He personally knew and labored under five First Hierarchs of the Russian Church Abroad, whom he always remembered with respect and love.

"After the 1964 retirement of Metropolitan Anastassy (Gribanovsky; +1965), for a long time the hierarchs could not decide on the new head of the Church between the two candidates: Archbishop John of Shanghai, now glorified a saint, and Archbishop Nikon (Rklitsky)," Vladimir Kirillovich recalled. "And then Archbishop John proposed that the junior-most of the hierarchs, Bishop Philaret (Voznesensky), vicar of Australian Diocese, be elected First Hierarch.

"Metropolitan Philaret was a strict ascetic, but at the same time he was interested in dealing with problems facing the youth, oftentimes working with them himself. He was active in assisting with the Russian school at the Synodal Cathedral. Metropolitan Philaret loved music very much and was himself a talented church composer."

Not long before his repose, Vladimir Kirillovich and his wife Tatiana Vladimirovna visited the Holy Land for the first time and, despite his ailment, he venerated practically all of the numerous holy sites. 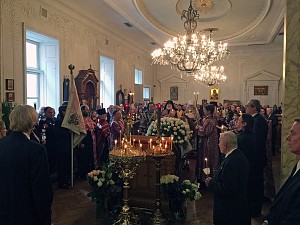