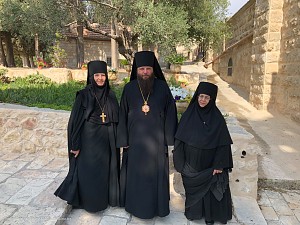 This past July, with the blessing of the Synod of Bishops of the Russian Church Abroad, Bishop Nicholas of Manhattan, vicar of the Eastern American Diocese, visited the Holy City of Jerusalem in order to observe and lead the anniversary commemorations in honor of the Centenary of the martyric deaths of New Martyrs Grand Duchess Elizabeth and Nun Barbara, whose relics abide in the Church of St. Mary Magdalene in Gethsemane.

– "I arrived in Tel Aviv on July 13 after my visit to St. Petersburg," Bishop Nicholas recounts, "I was met in the airport by the Head of the Russian Ecclesiastical Mission, Archimandrite Roman (Krassovsky) and we headed to Holy Ascension Convent on the Mount of Olives.

"On Saturday, July 14, Archimandrite Roman and I visited the Jerusalem Patriarchate, where we were hosted by Patriarch Theophilus III, who a lively interest in the life of the Russian Church Abroad, and blessed me to visit the holy places and to lead the divine services.

"On that same day, I served the All-Night Vigil in the evening at the convent in Gethsemane and on the next day, Divine Liturgy there, as well. On the eve and on the actual feast day of the Royal Martyrs, Archimandrite Roman and I served at Holy Ascension Convent on the Mount of Olives with the mission’s clergy. July 18, the remembrance of the Alapaevsk Martyrs, was observed in Gethsemane. The sisters of both convents had specially prepared for these feasts."

– How many sisters labor in our convents in the Holy Land today?

– Forty-three sisters live and toil on the Mount of Olives, and in Gethsemane and Bethany there are 45 (together with novices). The Russian Ecclesiastical Mission and its brotherhood must also be mentioned. The clergymen serve daily in the monasteries. Monk Chariton labors at the Monastery of Venerable Chariton. Every Wednesday, our clergy traditionally serve at the excavation site, and on Fridays, Liturgy is served in Bethany.

It is of note that, on the centenary of the martyric deaths of Grand Duchess Elizabeth Feodorovna, the Duke of Cambridge, Prince William, visited Jerusalem and the resting place of his great-grandmother in Gethsemane. He was welcomed by Patriarch Theophilus III of Jerusalem, and met with the Head of the Russian Ecclesiastical Mission, the abbess and sisters of the convent. Archimandrite Roman and those living in the convent were very impressed with this visit and their audience, for the Prince’s great-grandmother and mother of the Duke of Edinburgh, Prince Philip – Princess Alice Elizabeth Battenberg – took part in the creation of the Church of St. Mary Magdalene, where the relics of the nun-martyrs are kept.

During the Second World War, the Princess, having at that point converted to Orthodoxy, stayed in her husband’s homeland of Greece, where she hid Jewish refugees from the Germans. After the War, she founded the Christian Sisterhood of Martha & Mary. Alice von Battenberg died in 1969 in England. At first she was buried in the Royal St George’s Chapel, but in 1988 her remains, according to her will, were transferred to the Church of St Mary Magdalene. 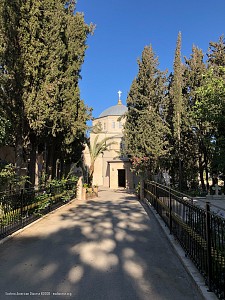 – How were the actual celebrations in honor of the centenary of the death of the Alapaevsk Martyrs? What was the atmosphere like in the convent?

– Everyone was anticipating that day with trepidation. On the eve, I visited the grave of the person who brought the relics of the nun-martyrs out of Russia through Peking into Jerusalem. He is Fr. Seraphim, abbot of St. Alexis Skete in the Diocese of Perm, a spiritual friend of the Grand Duchess. Immediately after the October Revolution, Abbott Seraphim was in Moscow and invited her to go with him to Alapaevsk, where trusted people in sketes could hide the Grand Duchess. Elizabeth Feodorovna refused to hide, but at the end of their meeting added: "If they will kill me, then I ask of you to give me a Christian burial." The remains of the holy nun-martyr were brought to Jerusalem in 1921 and placed into the crypt of the Church of the Holy Equal-to-the-Apostles Mary Magdalene in Gethsemane.

Abbott Seraphim is buried in the Greek monastery in Viri Galilæi on the Mount of Olives.

On the very day of the feast, July 18, hierarchal Liturgy was celebrated, co-served by the Head of the Ecclesiastical Mission Archimandrite Roman, Head of the Ecclesiastical Mission (MP) Archimandrite Alexander (Elisov), and local clergy. The sisters of the Mount of Olives, Gethsemane, and the "Hill Country" (Gorny) Convents prayed at the divine services. After Communion, Patriarch Theophilus III arrived at the church. A moleben was served before the tomb of Elizabeth Feodorovna. His Beatitude remarked that he is always glad to visit the Russian monasteries, thanked the sisters for their efforts, and the pilgrims who had gathered for the feast for their prayers. The Patriarch especially noted the fact that the nun-martyr, a Lutheran by birth, continued to serve the people and did not leave Russia, even when her life was at risk.

Two Anglophone parishes in the Eastern American Diocese: in Rocky Hill, NJ, and in Columbia, SC, a large number of whose parishioners are converts, are consecrated in honor of the Nun-Martyr Elizabeth. Convents in Germany and America are named in her honor. The faith and labors of this martyr have disseminated amongst non-Russian people. And, by her prayers, these people are receiving the Orthodox Faith.

– Your Grace, when did you yourself learn of the Nun-Martyr and the Royal Family?

– In our family, we were raised from childhood in the Orthodox Faith. I was seven years old when the Russian Church Abroad added the New Martyrs of Russia to the calendar of saints. The glorification took place in the Synodal Cathedral of the Sign. The icon of the New Martyrs was painted by Archimandrite Cyprian (Pyzhov).

We were told as children about the Great Prince Vladimir, Enlightener of Russia, the right-believing Princess Olga, and Prince Alexander Nevsky. In sermons, we heard of the Russian New Martyrs & Confessors, of their sufferings, and that it is imperative to keep their memory alive and to emulate their struggle. This was part of our lives from childhood.

But I become more closely acquainted with the life and struggle of the Nun-Martyrs Elizabeth and Barbara when I visited Jerusalem for the first time in 1998 with a group of pilgrims, headed by our future First Hierarch, then Archbishop Laurus. We visited the holy places, included Gethsemane, prayed at and venerated the holy relics, and this let us understand who these people were and how they suffered.

Later, I visited the "royal" churches and convent in honor of the Nun-Martyr Elizabeth Feodorovna in Buchendorf in the German Diocese, and become acquainted with their histories. 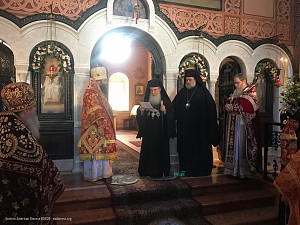 – In your opinion, which virtues could people of our time take from the Grand Duchess Elizabeth Feodorovna?

– The main thing for any person is to be a Good Samaritan: to see the image of God in all people and to always give help, both prayerful and physical, which sometimes is just saying a kind word. From the lives of the Alapaevsk Martyrs, we know that when their bodies were taken from the mineshaft, torn strips of cloth were discovered, which Elizabeth Feodorovna tied to the neighboring wounded, trying until the last minute to calm them: she sang hymns, particularly the Cherubic Hymn. She made them understand that the Lord never leaves anybody. She herself did not complain, and further served God and man. This is an example for us all.

– Which places in the Holy Land did you visit, at which holy places were you able to pray and serve?

– After the celebrations on Wednesday, I was able to visit Bethlehem, and on Friday, celebrated Liturgy on Golgotha in the Church of the Resurrection of our Lord. The service was led by Archbishop Theophanes of Gerasa from the Jerusalem Patriarchate.

On Friday, I stopped in Bethany at the comprehensive school. The school is situated in the "Russian district," where there are four buildings and a chapel. The director of the school is Nun Martha. I was greeted by Sister Martha, the nuns, and pupils of the Bethany school. During Great Lent of this year, Sister Martha visited our Eastern American Diocese, telling of the school, of how they live, of the difficulties which they endure. Last year, by the initiative of Prince Vladimir K. Galitzine, money was raised on a new van for the school in Bethany. Sister Martha invites everyone to help the school, to come there and work.

From Bethany, I left for the airport and returned to New York, thanking the Lord for a beneficent journey to these holy places. 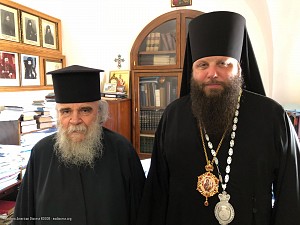