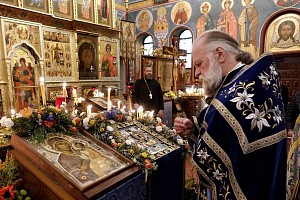 Over the course of nine days – November 21-30 – the Kursk Root Icon of the Mother of God, one of the most ancient holy icons of the Russian Orthodox Church (1295 A.D.) visited St. John the Baptist Cathedral in Washington, DC. Parishioners diligently prepared for the arrival of the wonderworking image. News of the icon’s impending arrival quickly spread, in order to alert as many of the faithful as possible of their opportunity to pray before this sacred 13th century icon.

Several years ago, the Primate of the Russian Church Abroad, His Eminence, Metropolitan Hilarion, appointed the holiday of Thanksgiving and the week following to be the period in which the Kursk Root Icon would pay its annual visit to Washington.

His Grace Nicholas, Bishop of Manhattan, since 2010 the guardian of the wonderworking icon, arrived on Wednesday evening, November 21, on the feast of the Holy Archangel Michael and the other Bodiless Powers of Heaven. The moment of the icon’s arrival coincided with the conclusion of the baptism of the infant Michael, who was blessed with the icon, much to his parents’ untold joy.

The following day, on the American civil holiday of Thanksgiving, the people of God began to gather at 11 o’clock for the triumphal greeting and first moleben and akathist before the Kursk Root Icon. After the service, worshippers gathered in the parish hall for the traditional festal luncheon.

Friday, November 23, was dedicated to visitation by the Kursk Root Icon of sick and elderly parishioners who were not able to personally attend the church services and venerate the holy image. That same evening, Bishop Nicholas took the Kursk Icon to the parish of the Holy Apostles in Beltsville, MD, where a moleben and akathist were served to the Most Holy Theotokos. 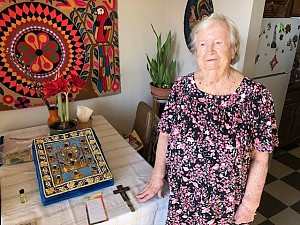 The following day, November 24, the feast of the myrrh-streaming Montreal-Iveron Icon of the Mother of God, the Kursk Icon was brought to St. John the Baptist Cathedral for Divine Liturgy, and placed in the center of the church, next to an exact copy of the Montreal Icon, which had been painted on Mount Athos to mark the first anniversary of the murder of its faithful guardian, Jose Muñoz-Cortes. It was endearing to see both images placed together, these primary holy of the icons of the Russian Church Abroad. That same day, cathedral rector Archpriest Victor Potapov was celebrating his namesday (Holy Martyr Victor of Damascus). Praying at Liturgy were His Eminence, Metropolitan Jonah former primate of the Orthodox Church in America; retired) and His Grace Nicholas, Bishop of Manhattan. Upon conclusion of Liturgy, Fr. Victor delivered a sermon dedicated to the significant of these two highly venerated icons for Russia and the Russian Diaspora.

After Liturgy, a luncheon was organized in honor of the rector’s namesday.

After the luncheon, Archpriest Ion Barbus (rector of Holy Transfiguration Church in Baltimore, MD), look the icon to his parish, where it was awaited by the Orthodox faithful of Washington’s large neighbor to the north.

That same day, at Fr. Victor’s request, Bishop Nicholas gave an interview with Russian journalist Dimitry Zlodyrev about the Kursk Icon. A video of His Grace’s interview can be seen viewed here.

While the icon was in Baltimore, an urgent request came to visit Marina Y. Grigorovich-Barsky, a servant of God expected to soon depart this temporal life. As soon as the icon was brought back from Baltimore to Washington, Fr. Victor took it to the sick woman’s apartment, placed the icon up against the bedridden woman, and served a moleben for preparation for repose. Two days later, the servant of God Marina, graced by the wonderworking icon, reposed in the Lord… 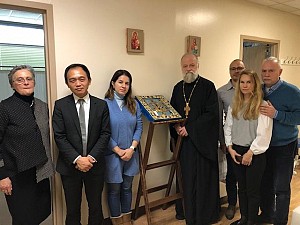 After this, the icon returned to St. John the Baptist Cathedral for the All-Night Vigil that was in progress, where it was awaited by a multitude. During the service, four priests confessed those who wished to commune of Christ’s Holy Mysteries on the following day.

On Sunday, the icon was present for both the early (English) and later (Slavonic) Liturgies. A multitude of worshippers communed at each Liturgy, from three chalices.

After both Liturgies, a moleben was served before the wonderworking image. Upon completion of the later service, a luncheon was served by the parish’s Sisterhood of the Protection of the Theotokos, and a gathering held in honor of the ninth anniversary of the murder of the young missionary Priest Daniel Sysoev (November 19, 2009).
Present at the gathering were Fr. Daniel’s widow, Julia, and Sergey Stanikovsky, publisher of the murdered priest’s various works. The meeting opened with the showing of a short film dedicated to Fr. Daniel. The 7-minute video can be seen here.
After the viewing, Matushka Julia spoke about Fr. Daniel’s life and his burning desire to bring as many people as possible closer to the One God. He ultimately paid for his zealous missionary service among Muslims with his life, when on November 19, 2009 an Islamist shot him point blank in his Moscow church.
Sergey Stanilovsky then spoke about his work publishing Fr. Daniel’s various writings in multiple European languages. It is truly remarkable to behold the multitude of book titles, brochures, and CDs produced by Fr. Daniel. He was only 35 years old when he was martyred. May the Lord grant his radiant soul repose!
Monday, November 26, was spent visiting sick parishioners.
On Tuesday the 27th, Fr. Victor brought the Kursk Icon to the embassy of the Russian Federation, where at the request of the embassy’s infirmary their offices and inventory were blessed.
The day concluded with several more visitations by the icon of extremely ill and elderly parishioners.
On Thursday, November 29, on the eve of its departure, the icon was once more brought to the church for a farewell moleben and akathist. As before, a multitude of worshippers gathered to pray before this great and hallowed icon for a final time.
Friday, November 30, arrived. Early that morning, Fr. Victor and his Matushka Maria departed with the holy icon for ROCOR’s Eastern American Diocesan Center in Howell, NJ, and the Kursk Root Icon was returned to the trustworthy hands of its guardian, Bishop Nicholas.
This concludes the fourth annual visit of the Protectress of the Russian Diaspora to the American capital. We have faith that this joyfully grace-filled tradition continue year after year.
Archpriest Victor Potapov
photos 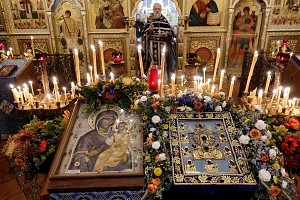