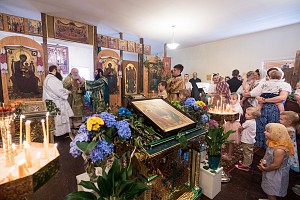 On Saturday the 15th and Sunday the 16th of June, the great feast of Holy Pentecost, Metropolitan Hilarion of Eastern America & New York paid an archpastoral visit to Holy Trinity Church in Mebane, NC, where he led the pastoral feast day and performed a diaconal ordination.

On Saturday evening, His Grace was greeted by parish rector Archpriest Sergei Orzhakhovskiy, the clergy, warden, and many parishioners and faithful from various parishes, who came to greet and the First Hierarch and receive his blessing.

Serving at All-Night Vigil were: Archimandrite Maximos (Weimar; abbot of Glorious Ascension Monastery in Resaca, GA), Fr. Sergei, Hieromonk Nikon (Kashkovalov; cleric of the Diocese of Krasnoyarsk, Russia), Protodeacon Dionysius Lvov (cleric of Our Lady "The Inexhaustible Chalice" Church in Brooklyn, NY), and Hierodeacon Vasileios Willard (cleric of St. Dionysios the Areopagite Monastery in St. James, NY). During the service, the Metropolitan prayed in the altar.

The following morning, Metropolitan Hilarion was greeted at the entrance to the church with bread and salt, after which His Eminence entered the church, where he was greeted by the clergy and faithful. The above-mentioned clergy concelebrated with the Metropolitan at Liturgy.

After the Eucharistic Canon, His Eminence ordained Subdeacon Justinian Burnett to the diaconate. The newly ordained Deacon Justinian will fulfill his service at Glorious Ascension Monastery and at St. John Cassian Chapel in Bessemer, AL.

Metropolitan Hilarion congratulated the clergy and parishioners with their patronal feast and the rector on the occasion of his birthday. In his sermon upon completion of Liturgy, he said, in part:

"Our Lord Jesus Christ promised His disciples that He would send them the Holy Spirit – the Comforter, Who would fortify them in the Faith and remind them of all that the Savior had taught them. When the apostles, the Mother of God, and other faithful prayer in the upper room, the Holy Spirit descended upon them, and people began to speak in various tongues, because many had come there from various countries for the feast. What transpired reminds us about the construction of the Tower of Babel, which served to divide people, such that they could no longer understand one another. The opposite transpired upon the descent of the Holy Spirit, the result of which was that people of various nationalities could understand one another. Thus, through the Holy Spirit, the Lord united us all in the Church, which He created and in which He draws us near to Himself, and directs us toward the Heavenly Kingdom."

After Liturgy, Vespers were served, during which the Kneeling Prayers were read.

The parish sisterhood invited all to a festal luncheon, during which interaction continued between the clergy, parishioners, and guests. 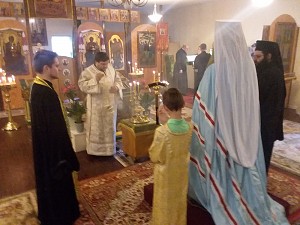