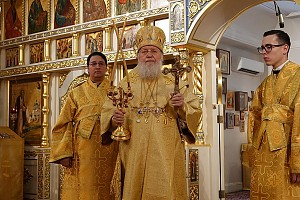 Singing at the service was the Synodal choir under the direction of Matushka Eugenia Temidis.

Traditionally, the feast of All Saints is considered the common namesday of all Orthodox Christians, and as such, a multitude of parishioners gathered in the cathedral for Liturgy that day, most of whom communed of Christ’s Holy Mysteries.

Addressing the faithful, Metropolitan Hilarion greeted them all with the feast, and reminded them that, in the Russian Orthodox tradition, every Orthodox Christian receives the name of a saint at his baptism, who then becomes his Heavenly patron. His Eminence called on the faithful to be acquainted with the life of their saint, and to imitate them in their fidelity to Christ and righteousness, and to try to themselves be like the holy saints of God, not departing from truth, from Christ’s Church, in order to attain the Heavenly Kingdom. 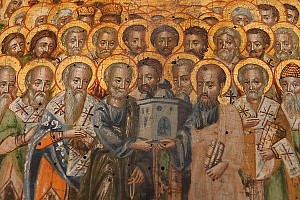