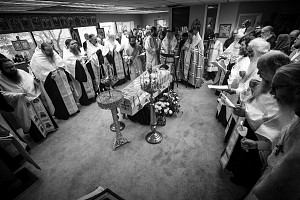 On Tuesday, July 30, His Eminence, Metropolitan Hilarion, paid an archpastoral visit to Holy Myrrhbearers Church in Harrisonburg, VA, and led the funeral of senior Eastern American Diocesan cleric Archpriest John Moses, who reposed in the Lord on Thursday, July 25.

After Liturgy, the funeral service began, led by Metropolitan Hilarion. Serving alongside him were all of the above-mentioned clerics (excepting Fr. Nektary, who prayed in church, along with Archpriest John Johnson (rector of St. Thecla Mission in Silver Spring, MD) and parish Deacon Thomas Opyoke. They were joined by Metropolitan Jonah (Paffhausen) and Archpriests Victor Potapov (rector of St. John the Baptist Cathedral in Washington, DC), George Johnson (rector of Holy Apostles Church in Beltsville, MD), and Onuphry Keith (rector of St. Nicholas Church in Winston-Salem, NC).

Fr. Serge Lukianov delivered the eulogy, in which he said, in part:

"Every time he spoke with us, all of his wisdom was always full of love, always full of compassion, always worrying about ‘the little guy,’ the one who is forgotten… that was the way he was. He would reach out to people that [often others] did not even want to talk to. That was Fr. John. He would go places and pull people out of the gutter, because he wanted them to feel that love of Christ. That was Fr. John… We would spend hours talking, and our conversations were always about Christ, always about that love that we have with Christ. And I think that is that love that we have to take from this funeral."

Metropolitan Hilarion greeted the mourners, and presented them all icons and his blessing. As a comfort to the family, special icons were presented to Matushka Alexandra Moses, Fr. Gabriel and Matushka Tatiana Weller, Sophia Blair (Matushka Tatiana and Sophia are Fr. John's sisters), and his children – Matushka Elizabeth (Bonnie) Opyoke and John.

The burial took place at Thornrose cemetery in Staunton, VA and a memorial repast was served at a local restaurant for all in attendance. 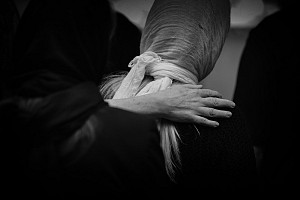