Buena, NJ: Feast of Transfiguration of the Lord in Holy Protection Skete 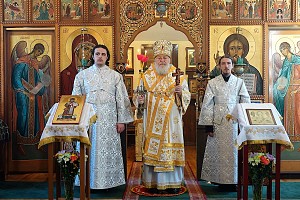 On Monday, August 19, Metropolitan Hilarion of Eastern American & New York paid an archpastoral visit to Holy Protection Skete in Buena, NJ, where he celebrated Divine Liturgy for the great feast of the Transfiguration of the Lord.

At the Little Entrance, Fr. Anatoly was awarded the right to wear the kamilavka.

Despite its being a weekday, faithful gathered at the church from across New Jersey and New York. Most parishioners communed of Christ’s Holy Mysteries.

Fr. Alexius delivered an edifying sermon to those present on the subject of the feast. Metropolitan Hilarion then blessed the fruits, and congratulated the clergy and faithful with the radiant feast of the Lord’s Transfiguration. He also thanked Fr. Tikhon for his labors in restoring this once-closed parish, which has since become a skete – a place of prayer and spiritual fortification. His Eminence congratulated Fr. Tikhon with his upcoming namesday, and presented him an icon of Venerable Gabriel of Samtavro with pieces of the saint’s relics.

In response, Fr. Tikhon noted that people work at the skete not only in order to restore its walls and external majesty, but also so that the clergy and pilgrims can find a place of prayer and spiritual fortification and comfort here. He expressed his joy and gratitude to the Metropolitan, clergy, and guests for visiting the skete and for their shared prayers. Afterward, all proceeded to the refectory, where they received blessed fruits and continued their brotherly interaction. 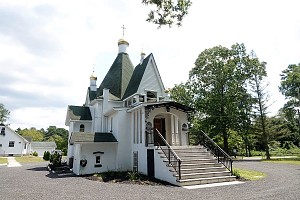 Buena, NJ: Feast of Transfiguration of the Lord in Holy Protection Skete - 08/19/19