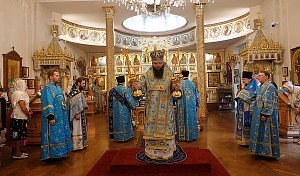 The service was held under the aegis of the wonderworking Kursk Root Icon of the Mother of God, recently returned from a visit to the Diocese of Saratov in Russia. As part of the ongoing feast of the Dormition of the Most Holy Theotokos, in addition to the icon of the feast and the Shroud, the faithful in church were able to venerate a reliquary with a piece of the Tomb of the Mother of God in Gethsemane.

A large number of cathedral parishioners and New York City faithful gathered at Liturgy, most of whom communed of Christ’s Holy Mysteries.

Upon completion of the service, Bishop Nicholas congratulated those present with the ongoing feast of the Dormition of the Most Holy Theotokos, and called on them to take the humility of the Mother of God as an example for how one must act in this earthly life; he also touched on what was read from the Gospel that day.

"Today, we heard an excerpt from the Gospel according to Matthew, wherein each one of us is given a useful lesson. A certain servant owed his lord 10 thousand talents. The lord summoned his servant and demanded what he was owed. The servant tearfully begged his lord to forgive him and to wait while he gathered the needed sum. At first, his lord did not want to hear him out, even desiring to sell all that the servant had. But ultimately, he had mercy on him and forgave him the entire debt.

"And then the servant meets his fellow, who owed him 100 denarii, and demanded that he repay his debt. But the latter could not pay it, and the servant had him placed in debtor’s prison. When he learned of this, the lord was outraged, and handed over the cruel servant to the tormentors.

"The Gospel reading concludes: if we will not forgive our neighbors, how can we dare to ask God to forgive us our sins?"

Bishop Nicholas called on the faithful to forgive one another, to offend none, not to become angry, not to behave themselves crudely, and to see in all the image of God.

His Grace then spoke about the upcoming travels of the Protectress of the Russian Diaspora – the Kursk Root Icon of the Mother of God – to Uzbekistan and Kazakhstan, as well as about the yearly visit to Kursk, where the traditional procession with the wonderworking image will take place.

The sisterhood prepared a Sunday luncheon for the clergy and parishioners in the parish hall. 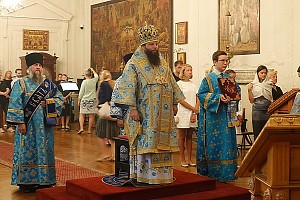