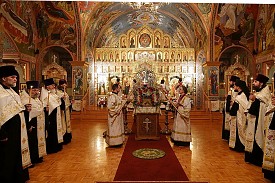 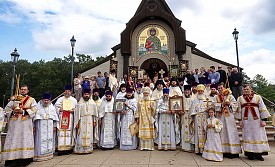 On Wednesday the 11th and Thursday the 12th of September, the feast of the Translation of the Relics of the Holy Right-Believing Great Prince Alexander Nevsky, Metropolitan Hilarion of Eastern America & New York paid an archpastoral visit to St. Alexander Nevsky Diocesan Cathedral in Howell, NJ, and led the celebrations in honor of the church’s patronal feast day.

Thursday morning began with the greeting of the First Hierarch of the Russian Church Abroad at the entrance to the cathedral, after which Divine Liturgy began. Concelebrating with Metropolitan Hilarion were:

Prior to the start of Liturgy, His Eminence tonsured altar server Roman Serebrennikov a reader. At the Little Entrance, for their dedicated service to the Holy Church, Fr. Arseny (Manko) was awarded the jeweled cross, while cathedral clerics Frs. George Kaplanov and Paul Drozdowski each received the kamilavka.

Singing at the festal divine services was the St. Alexander Nevsky Cathedral male choir, under the direction of Maestro Vladimir Gorbik, conductor at Moscow’s Representation Church of the Holy Trinity-St. Sergius Lavra.

A multitude of parishioners and faithful from neighboring states came to church to honor the memory of the Holy Right-Believing Prince Alexander Nevsky. Most of these confessed their sins and communed of Christ’s Holy Mysteries (the faithful were communed from three chalices).

Upon completion of Liturgy, Fr. Vasyl Kuzmich addressed the gathered faithful with a sermon, in which he spoke about the life and ascetic struggles of the Right-Believing Prince Alexander Nevsky, and the example he provides for today’s Orthodox Christians.

In keeping with tradition for the patronal feast, the clergy, faithful, and children went in procession around the cathedral with icons and banners. Metropolitan Hilarion commemorated the cathedral’s builder and first rector, Protopresbyter Valery Lukianov, at his grave behind the cathedral altar.

Upon returning to the church, His Eminence congratulated the rector and parishioners on the occasion of their patronal feast. Fr. Serge thanked the Metropolitan for their joint service, noting that the first Divine Liturgy in the as yet under constructin cathedal was celebrated exactly 25 years ago by Metropolitan Vitaly (Ustinov; +2006) and then-Bishop Hilarion of Manhattan. For his selfless service in the cathedral, the parish presented Fr. Rafael Melendez with a jeweled cross.

On behalf of the clergy of St. Nicholas Patriarchal Cathedral, Fr. Nicodemus (Balyasnikov) greeted those gathered, and called on the faithful to remain "a single Orthodox community, a vital and warm Christian family," and wished that "for many more centuries God’s name might be glorified here, and that the Russian Orthodox Church tradition and Orthodox community life might be preserved in the same majesty."

The celebration of the patronal feast concluded with a luncheon prepared by the cathedral’s sisterhood, during which interaction between the clergy and parishioners continued. 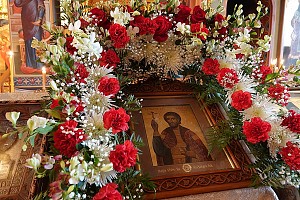