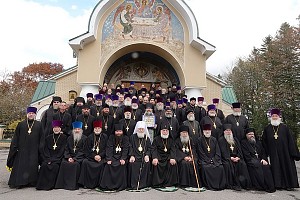 On Wednesday, October 23, the feast day of the Venerable Elders of Optina, the pastoral conference for clergy of the Eastern American and Canadian Dioceses continued a Holy Trinity Monastery in Jordanville, NY. All of the conference participants – 60 priests and 15 deacons – concelebrated at Divine Liturgy in the monastery’s Holy Trinity Cathedral, led by Metropolitan Hilarion of Eastern America & New York.

Joining the First Hierarch of the Russian Church Abroad were Archbishop Gabriel of Montreal & Canada, and Eastern American Diocesan vicar Bishops Nicholas of Manhattan and Luke of Syracuse. The service was held under the aegis of the wonderworking Kursk Root Icon of the Mother of God, recently returned from lengthy travels abroad.

Singing at Liturgy was the male choir of the Patriarch Tikhon Russian-American Music (PaTRAM) Institute, under the direction of Vladimir Gorbik, conductor at the Moscow Representation Church of Holy Trinity-St. Sergius Lavra. The hymn "A Mercy of Peace" was sung in the presence of its composer – Abbot Silouan (Tumanov), a cleric of the Diocese of St. Petersburg, who also concelebrated at Liturgy that day.

At the Little Entrance, for their dedicated service to the Russian Church Abroad, Metropolitan Hilarion awarded Archpriest Mark Mancuso (dean of the Carolinas & Tennessee, rector of St. Elizabeth the New-Martyr Church in Columbia, SC) the jeweled cross and Deacon Alexey Pnev (cleric of Nativity of the Mother of God Church at the New Kursk Root Hermitage in Mahopac, NY) the right to wear the double orarion.

Upon completion of the service, Priest George Kaplanov (cleric of St. Alexander Nevsky Diocesan Cathedral in Howell, NJ), addressed the faithful with a sermon on the lives of the Optina Elders and the example they set for today’s Orthodox Christians.

Most of the laity from neighboring states and Canada who came to pray that day at the triumphal hierarchal Liturgy communed of Christ’s Holy Mysteries.

Addressing the conference participants and faithful, Metropolitan Hilarion, in part, greeted the brethren of Holy Trinity Monastery and thanked them for their prayers, which "help us wherever we are and wherever we labor," and wished them God’s aid. The Metropolitan also congratulated with their namesdays those present who bear the names of any of the Optina Elders.

Greeting the senior-most of the serving deacons – Protodeacon Joseph Jarostchuk – Metropolitan Hilarion announced the decision of His Holiness Kyrill, Patriarch of Moscow & All Russia, to award the Russian Orthodox Church’s Order of Venerable Sergius of Radonezh, 2nd Class, to Fr. Joseph for 50 years of diligent diaconal service.

In response, Fr. Joseph thanked the bishops for their love and care, which give him the strength to continue serving, and asked for the prayers of those gathered.

Concluding, the protodeacon intoned the Polychronion to the hierarchy and clergy, and the choir sang the reply.

Conference participants and guests were then treated to lunch, after which a group picture of the hierarchs and clergy was taken in front of the cathedral.

The pastoral conference concluded its work, but its participants were in no hurry to return home: they continued to discuss issues of importance to the clergy and their parishes and monasteries with their ruling and vicar bishops, and shared their accumulated experiences, ideas, and proposals for the future with their brother clergy. 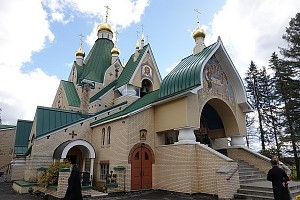